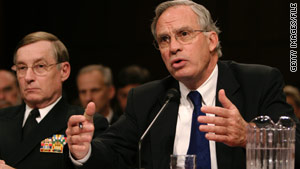 Then-CIA chief Porter Goss, here in 2005, did "sympathize" with the motives in destroying the tapes, an official says.
STORY HIGHLIGHTS
RELATED TOPICS

(CNN) -- The destruction of nearly 100 videotapes showing the harsh interrogation of two al Qaeda detainees in 2005 triggered concerns within the CIA over whether it was adequately cleared, according to newly released documents.

Then-White House counsel Harriet Miers also was "livid" about not being informed about the action in advance, the documents show.

The documents -- with large sections blacked out -- were released Thursday in response to a Freedom of Information Act request by the American Civil Liberties Union.

Internal e-mails include one alleging that Porter Goss, then CIA chief, agreed with the decision after the fact.

"PG laughed and said that actually, it would be he, PG, who would take the heat," one e-mail reads. "PG, however, agreed with the decision."

A former U.S. intelligence official familiar with the circumstances surrounding the tapes said Goss did not authorize the destruction and did not believe it was "right" or a "wise" move.

Goss believed the tapes "provided proof that the CIA has followed Justice Department guidelines" on interrogations, the official said.

But the official added that Goss did "understand and sympathize with Jose Rodriguez's motives" for destroying the tapes. Rodriguez, head of the CIA's clandestine service, was concerned the tapes could become public.

"As Jose said, the heat from destoying [sic] is nothing compared to what it would be if the tapes ever got into public domain -- he said that out of context, they would make us look terrible; it would be 'devastating' to us," the e-mail reads.

It is not clear who wrote this e-mail, which was sent to Kyle "Dusty" Foggo, then the CIA's executive director.

The documents discuss 92 tapes involving interrogations of Abu Zubaydah and Abd Al-Rahim al-Nashiri, whom the United States was secretly holding. The tapes were created in 2002 and destroyed in 2005.

Zubaydah was allegedly al Qaeda's top military strategist before his capture in 2002. A Bush-era memo released by the Obama administration said interrogators used the waterboarding technique on Zubaydah 83 times in August 2002.

Nashiri was accused of planning and directing the 2000 attack against the USS Cole in Yemen.

One e-mail to Foggo in 2005 -- after the tapes were destroyed -- says John Rizzo, then acting general counsel at the CIA, had to inform Miers "because it was she who had asked to be advised before any action was taken. Apparently, Rizzo called Harriet this afternoon and she was livid, which he said was actually unusual for her."

The person writing the e-mail indicates to Foggo that while he understood the decision, he was "no longer feeling comfortable" with it and that "we may have 'improperly' destroyed something."

In a statement, ACLU attorney Ben Wizner said the documents "provide further evidence that senior CIA officials were willing to risk being prosecuted for obstruction of justice in order to avoid being prosecuted for torture. If the Department of Justice fails to hold these officials accountable, they will have succeeded in their cover-up."

CIA spokesman George Little said a Justice Department prosecutor has been looking into the mater for more than two years.

"The agency has cooperated fully with that inquiry and will, of course, continue to do so. We hope that this issue is resolved soon," Little said in a statement.

CNN's Pam Benson and Adam Levine contributed to this report.