Reporter's notebook: View from the 'sidekick' seat on a Tea Party bus 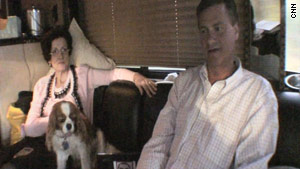 Tea Party Express Chairman Mark Williams jokes that his dog Casey was blogging from the bus.

Washington (CNN) -- It was one of those behind-the-scenes moments that a reporter covering the Tea Party rarely gets to witness.

About 1:35 a.m. Thursday, a man ran up to a Tea Party Express bus, approaching from the left, waving his arms and shouting something that none of us on the bus could understand.

I was sitting in the "sidekick seat," a leather perch near the driver with a clear view.

The three-bus caravan had just rolled into Washington, hours ahead of the final rally of the "Just Vote them Out" tour -- the movement's third national event since coming together a little over a year ago. The bus I was on carried about 14 weary travelers: Tea Party leaders and activists, journalists and Casey the dog, a small girl with floppy ears belonging to Tea Party Express Chairman Mark Williams.

We had just arrived after a grueling trip from Boston, Massachusetts, where Sarah Palin rallied a crowd of thousands on Boston Common, and were blocks away from our destination.

The bus was hard to miss, wrapped full-on in a Tea Party advertisement. Apparently, just the sight of it made the man angry. As he rushed us, shouting all the way, the bus driver cautiously slid open his window.

"This country is at war," the man screamed into the slightly opened window. The driver quickly slammed it shut.

No one on the bus, including me, could understand what point the man was trying to make. The activists dismissed him as a drunk. But one thing was very clear: The Tea Party had once again attracted attention from one of its many critics.

In fact, the Tea Party movement has earned plenty of detractors as it has traveled cross-country labeling President Obama a "socialist" and blasting what it says is big government run amok, while invoking the Constitution's sanctity.

Agitators have thrown eggs at the buses. Ray March, one of the drivers, told me that a semi-truck driver tried to run his bus off the road. Now there was a late-night ranting as the conservative activists rolled into the nation's reliably liberal capital.

On the drive to Washington, the activists had aimed their ire at cable news channels, news sites or blogs they felt were biased against the Tea Party movement. They praised outlets they felt cast the movement in its right light. From what I saw, the bus' TV system was tuned to one news outlet in particular. Hint: It wasn't CNN.

As for creature comforts, space was a commodity.

Seating was at a premium. Virtually every seat was spoken for. Four bunk beds were loaded with stuff. One guy slept on the floor next to one of them, in the middle of the narrow walkway that attached the front of the bus to the back. Everyone stepped over him to get by.

Work spaces were virtually nonexistent, with laptops and BlackBerrys competing for space with kitsch and curling irons.

Hanging over the toilet in the cramped bathroom was a sign with a stern warning: "Liquids only." Every once in awhile, a refrigerator would fly open -- spilling items out.

Still, despite the long trip, tempers never flared and pleasant conversation was not hard to find. The activists seemed to get along with each other and were accommodating to journalists.

I mostly sat in the front of the bus. But I also spent time in the back, working out of a cramped space with the other journalists embedded for the trip.

Crammed into a U-shaped area with a small desk slab, we all did our work: I wrote stories, an editor and reporter team from Los Angeles-based Pajamas TV did on-camera reports and a Fox News radio reporter did live spots. He scripted a line about Tea Partiers "partying like it was 1773" in one of them, a reference to the year of the original Boston Tea Party. We all laughed at that one.

In the front of the bus, Casey was lounging comfortably.

The pooch sat on one of the leather bench sofas along the window for most of the trip. It was a nice spot, considering that our Boston to Washington trip, expected to take about 7 hours, actually took more than 10 hours. Multiple bathroom breaks and food stops had prolonged the trip.

At one point, as I was interviewing Williams, he mentioned Casey, put a laptop in front of her, and said she likes to blog from the bus.