Tea Party battles for 'soul of this country' 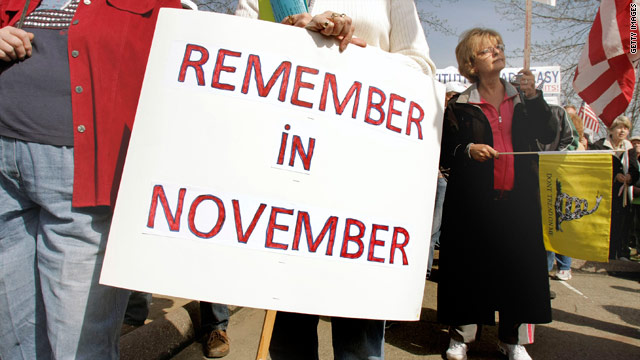 The slogan of Tea Party Express' third tour is "Just Vote Them Out."
STORY HIGHLIGHTS

(CNN) -- As Tax Day approaches, Tea Party activists are uniting to voice the message they've been honing for more than a year: It's time to reduce the size of government, honor the Constitution and return to fiscal responsibility in Washington.

The Tea Party Express' third cross-country tour brings activists to Boston, Massachusetts, on Wednesday, before culminating with an anti-tax rally at the nation's capital on Thursday.

The "Just Vote Them Out!" tour has weaved through areas represented by vulnerable Democrats, bringing thousands to Senate Majority Leader Harry Reid's hometown in Nevada on its opening day. The tour's other top target -- Democratic Rep. Bart Stupak of Michigan -- announced his retirement the same day the tour was in his turf.

Tea Party favorite Sarah Palin was the top draw at the Boston event. Republican Sen. Scott Brown, whose winning Massachusetts campaign was infused by the Tea Party, turned down his invitation to the event, although his office said he wished the rally success.

Are you at a Tea Party rally? Share your images

So far, the movement's success is in the eye of the beholder.

Tea Party activists running for office have yet to make much impact in the Republican primaries, and Stupak rejected the notion that the Tea Party played a role in his decision to step down.

But House Majority Leader Steny Hoyer admitted Tuesday that the protests and rallies by the Tea Party across the country are having an impact on lawmakers' decisions about running for another term.

"Do I think that negative atmosphere that's been created by the Tea Party and by others certainly goes into the thinking of members? I think it does. I think you honestly have to point out that it does," Hoyer said.

Hoyer: Tea Party having an impact

The Tea Party developed last year in protest to what its supporters saw as overspending in Washington -- by Republicans and Democrats -- following the stimulus bill, the bank bailouts and President Obama's budget.

Fueled by anger at the government and fear of where the country was headed, it grew from dozens to hundreds of loosely linked groups.

Until recently, there had been little movement toward coalescing as a formal party.

Tom De Luca, a professor of political science at Fordham University, said while Tea Party activists have affected the national agenda, the larger impact has been on the Republican Party.

"It's energized the hardcore base of Republicans who tend to share a lot of Tea Party ideas, but on the other hand, it's going to bring to the floor a split that has been in the Republican Party for quite a long time," De Luca said.

"Go beat them," he told the attendee. "That's what elections are all about. I encourage candidates to run," Santorum said, adding the GOP must focus its energy on electing conservative candidates in the Republican primaries.

Rep. Michele Bachmann, R-Minnesota, said last week that the Republican Party and the Tea Party are in the process of merging.

If the Tea Party pushes Republicans further to the right, however, it could hurt them in November, De Luca noted. Centrist voters would likely favor a Democrat over a far-right Republican, he said.

Republican Mississippi Gov. Haley Barbour pleaded with conservatives at the conference to stick together as the elections near.

"The Democrats' fondest hope is to see Tea Party or other conservatives split off and have a third party to split the conservative vote," he said. "We can't let that happen. We've got to stay unified."

"They want to incorporate it to the degree they can without hurting the party's chances," he said.

As for Tea Party members, they want to hold lawmakers' feet to the fire without being swallowed up by a party some fear is trying to Astroturf their grassroots movement.

"I got more knife wounds in my back from Republican operatives than Democrats could ever do," said Mark Williams, chairman of the Tea Party Express III tour. "The Democrats at least stand there and tell me they hate me, and tell me that they hate America. These Republicans smile at me, shake my hand and then stab me in the back."

The Tea Party Express is run from the same building as a Republican political consulting firm.

Joe Wierzbicki, who coordinates the Tea Party Express, told CNN earlier this year that the people who run the movement "need a major political party."

"I think what you'll find is at Tea Party rallies, a lot of those people who are mad at the Republican Party, many of them are Republicans themselves. Us included," he said.

"It seems to have captured the attention of a certain, very large and important segment, but still -- a certain segment of society," De Luca said. "Its lasting power is someone questionable."

What remains to be seen is how closely the movement allies itself with the GOP, to what extent the various Tea Party groups come together as a formal organization and whether the activists solidify around a more coherent message removed from vitriolic embellishments and not grounded in fear, De Luca said.

"What will happen to them if the economy improves? What will happen to them if the health care plan starts to work? What happens to this extreme message if things turn in ways that no longer enflame all of these doubts many people have about who they are as Americans, but starts to reassure them that America is moving in a better direction?" he asked.

But at least for now, the movement's focus remains on cleaning house, Williams said.

"We're in a war for the soul of this country," he said. "We need to purge both parties. We need to purge the Democrats of the Marxists and the Republicans of the weaklings."