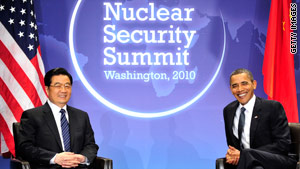 Washington (CNN) -- President Obama and Chinese President Hu Jintao held a private meeting Monday before the start of a nuclear security summit, with the focus on Iran -- and its opposition to the nuclear nonproliferation agreement.

"The Chinese very clearly share our concern about the Iranian nuclear program," Jeff Bader, senior director for Asian affairs for the National Security Council, said in a conference call. "They share our overall goal of preservation of the nonproliferation regime."

The United States and its allies believe Iran is aiming to develop nuclear weapons. The Iranian government, meanwhile, indicates that it only wants a peaceful nuclear energy capability.

Obama and Hu agreed in the meeting that Iran must meet its nonproliferation obligations, Bader added. The two also said they are instructing their delegations to work on a sanctions resolution.

"The resolution will make clear to Iran the costs of pursuing a nuclear program that violates Iran's obligations and responsibilities," Bader said.

A spokesman for the Chinese delegation said in a statement that the two countries "share the same overall goal on the Iranian nuclear issue."

"China hopes that various parties will continue to step up diplomatic efforts and actively seek effective ways to resolve the Iranian nuclear issue through dialogue and negotiations," the spokesman added.

The Chinese are currently at the table with Susan Rice, the U.S. ambassador to the United Nations. China is one of the so-called P5+1 nations, along with the United States, France, Germany, Russia, and Great Britain, that have negotiated with Iran over the nuclear issue.

Rice recently said that the Chinese commitment represented progress because China previously has been unwilling to agree to stronger sanctions against Iran sought by the United States and other allies.

Now, with the U.N. Security Council permanent members negotiating tougher sanctions, "the Iranians have been beating down the doors of every country in the world to try to avoid" a new sanctions resolution," Secretary of State Hillary Clinton said Sunday on NBC's "Meet The Press."

When asked if Iran knew how to build a nuclear weapon, Clinton wouldn't say -- though Gates declared the answer was "no."

Nuclear nonproliferation has been a top priority for the Obama administration.

Last week, Obama and Russian President Dmitry Medvedev signed a historic nuclear arms treaty that looks to reduce the nuclear arsenals of both countries. U.S. officials said they hope the trust from the agreement signals greater openness by Russia to toughen sanctions against Iran.

In March, Obama and French President Nicolas Sarkozy made a joint call for tougher U.N. sanctions on Iran. Obama conceded that the push for stronger sanctions lacked backing from some nations, but he said the effort to convince the U.N. Security Council to impose additional measures would continue.

In addition, Obama said he wanted U.N. approval of new sanctions "within weeks."