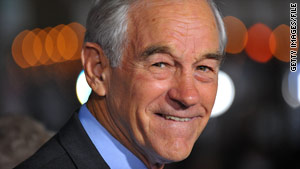 Texas Rep. Ron Paul's loyal supporters, many of them college-aged, showed up in droves on Saturday.

Romney did not appear at the New Orleans conference, but received 439 votes -- or 24 percent -- of the 1,806 ballots cast by delegates at the conference, held in New Orleans. Paul earned 438 votes.

Conference-goers had predicted that Romney and Paul would compete for the straw poll's top two spots, as their supporters worked hard to get like-minded delegates to the voting room.

A group called "Evangelicals for Mitt" was a visible presence at the conference, handing out copies of Romney's new book and pink piggy banks emblazoned with the slogan, "Elect a president who won't break the bank."

Paul's loyal supporters, many of them college-aged, showed up in droves on Saturday to cast ballots before attending the congressman's speech in the afternoon.

Like most straw polls, Saturday's results should not be considered a reliable predictor of future success. Former Tennessee Sen. Bill Frist won the last SRLC contest in 2006 but never ran for president. The straw poll was accurate in 1998, however, when George W. Bush took the top spot two years before winning the White House.

At least two, Barbour and Perry, asked to have their names kept off the ballot.