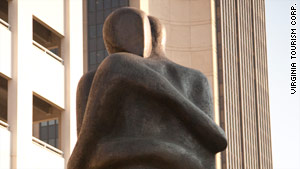 This sculpture was meant to raise awareness about Richmond, Virginia's, role in the pre-Civil War slave trade.
STORY HIGHLIGHTS

(CNN) -- Virginia's proclamation of Confederate History Month without any reference to slavery was unacceptable, President Obama said in an interview broadcast Friday.

"Now, I don't think you can understand the Confederacy and the Civil War unless you understand slavery. And so, I think that was a -- an unacceptable omission. I think the governor's now acknowledged that."

Obama was referring to Virginia Gov. Bob McDonnell, who apologized Wednesday for leaving out any reference to slavery in his recent proclamation designating April as Confederate History Month, calling it a "major omission."

McDonnell, a Republican, also said he would amend the proclamation.

ABC asked the nation's first African-American president to weigh in on the controversy.

"I think it's just a reminder that when we talk about issues like slavery that are so fraught with pain and emotion, that we'd better do so thinking through how this is going to affect a lot of people, and their sense of whether they're part of a commonwealth or part of our broader society."

McDonnell's written apology said, "The failure to include any reference to slavery was a mistake, and for that I apologize to any fellow Virginian who has been offended or disappointed."

The new language added to the proclamation says that "it is important for all Virginians to understand that the institution of slavery led to this war and was an evil and inhumane practice that deprived people of their God-given inalienable rights."

It adds that "all Virginians are thankful for its permanent eradication from our orders."

McDonnell's statement noted that while Virginia was home to the capital of the Confederacy, it was also the first state in the nation to elect an African-American governor, L. Douglas Wilder, whom McDonnell called "my friend."

In an interview with CNN on Wednesday, Wilder said McDonnell's apology and his introduction of additional proclamation language was "the right thing for him to have done."

"Most people recognize that slavery was the cause of the [Civil] war," Wilder said, noting that McDonnell had called him Wednesday. "The war was not a glorious thing in our past. It was something that we were able to withstand in terms of tearing the country apart. ... Thank God that war ended with the Confederacy losing."

Not all of Wilder's fellow Democrats were willing to forgive McDonnell so quickly Wednesday.

"He has a right to apologize," Virginia state Sen. Henry Marsh III, who is also African-American, told CNN on Wednesday. "But I don't accept that as a good answer, because this is a pattern of this governor.

"He says the wrong thing, he sends a signal to his base, and then he makes an apology," Marsh said. "It's a question of whether or not he's sincere or not."

McDonnell is the first Virginia governor in eight years to issue a proclamation declaring April as Confederate History Month.

Two previous Democratic administrations refused to do so.

"A failure to acknowledge the central role of slavery in the Confederacy and deeming insignificant the reprehensible transgression of moral standards of liberty and equality that slavery represented is simply not acceptable in the America of the 21st century," he continued.