Interest in photographing return of war dead to U.S. wanes 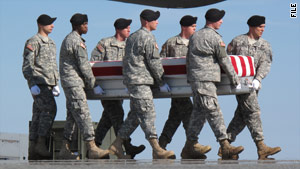 The remains of a service member are returned to Dover Air Force Base in October.
STORY HIGHLIGHTS
RELATED TOPICS

(CNN) -- One year after the ban on photographing war dead returning to the U.S. was lifted, it is rare to see those images in the mainstream media.

Last April, the first images of a fallen service member's return were allowed by the Pentagon after more than 20 years. The ban was put in place by then-President George H.W. Bush but done away with by the Pentagon under the Obama administration.

In the first days after the ban was lifted, the media gave widespread coverage of the neatly choreographed procedure of removing a service member, killed just hours before in Iraq or Afghanistan, from a cargo aircraft to a waiting vehicle.

Over the past year, 472 of these transfers have occurred at Dover Air Force Base in Delaware, where every casualty is handled by the Air Force Mortuary Affairs Center to prepare the body's return to families.

Of those 472, about 260 -- or 55 percent -- have been open to media coverage, according to statistics from the Mortuary Affairs office. And over the past year, the media attendance has dropped off to a trickle.

"Those numbers reflect that the interest in covering the story diminishes as the story becomes repetitive," said Ralph Begleiter, a former network correspondent and now professor of communications at the University of Delaware.

The release of government images of the fallen and the access to the media were the results of a battle waged quietly by Begleiter and the National Security Archives, a research organization at George Washington University that collects and publishes declassified documents obtained through the Freedom of Information Act.

Paula Davis, whose son, U.S. Army Pfc. Justin R. Davis, was killed in Afghanistan in June 2006, was not able to see images of her son's return. She strongly supported lifting the ban.

"I believe America should mourn along with the families as it bears witness to the human cost of war," Davis said. "I'm glad the families now have a choice."

Under the year-old rules, family members of the deceased have to agree to allow media to be present.

Last April, as the policy was to go into effect, the first chance to see the images came quickly. In the late afternoon, the media was notified of the first service member whose family allowed media coverage.

That night, about a dozen video cameras and a handful of still cameras showed up and were lined up in a designated area of the tarmac to watch the remains of the fallen service member be removed from an aircraft.

For a few weeks after the ban was lifted, the news media consistently sent camera crews to Dover to cover the almost-daily events. Then the coverage tapered off dramatically, most often with just a single camera covering each arrival open to media.

"The coverage has been respectful but woefully inadequate," said Howard Kurtz, a Washington Post media critic and CNN contributor.

"Once the novelty wore off, the media, with only a couple of exceptions, lost interest in covering the returning troops," he said.

One of those exceptions was in October after a series of attacks and a helicopter accident in Afghanistan killed 18 Americans, including three Drug Enforcement Administration agents.

Journalists and their cameras showed up at Dover in the overnight hours to cover the removal of remains from the aircraft and to see President Obama watch over the flag-draped cases as they were carried off the aircraft.

But between the exceptions, the coverage remains sparse.

The Associated Press does send a still photographer to each of the arrivals, according to Paul Colford, the organization's spokesman.

"This is a significant, ongoing assignment for the AP as we continue to recognize the importance of the homecomings as news for the families and communities of those affected by these deaths," Colford said.

"We get enough responses from our member news organizations that these are of value to them because they are not in the position to come to Dover and cover them," he said.

Many major news organizations rely on the fact that The Associated Press is covering these events, and will keep the images as they are brought in, but often they are still not used.

Ami Neiberger-Miller, a spokeswoman for Tragedy Assistance Program for Survivors, said, "It is sad that they don't cover it [the return of remains] as often as they could."

The program provides a support network for the surviving families of those who have been killed while serving in the U.S. military.

"The nation has been at war for a long time, and these troops are paying the ultimate price, and much of the nation does not see that we are still at war," she said.

That point is not lost on John Ellsworth who lost his son, Justin, in November 2004 in Iraq, and is president of Military Families United. He says the national coverage is gone and it's left to local coverage.

"During the Vietnam War, the media showed the flag-draped coffins every night and listed the names of those killed. You don't see that happening today," Ellsworth said.

Despite the lifting of the photography ban, many families do not want the return of their loved one open to media coverage.

Of the 472 that have been returned over the last year, 205 either allowed just a U.S. military camera to record the event or no camera at all.

"Some families do not want a public spectacle or a media circus, some just want to honor their loved ones in private," Ellsworth said.

Justin Ellsworth was a lance corporal in the Marine Corps when he was killed. His father said his son's actions saved the lives of 11 other Marines that November day.

Ellsworth said he would have probably allowed media coverage if the option was given to him in 2004, though he does not agree with the change in the photography policy because he believes it was done for political gain.

Regardless of how the coverage has shrunk over the past year, many families still think it is important to let the media cover the return of fallen troops.

"Families see it as honoring their loved ones, and the whole community can participate through the mourning process through the media," Neiberger-Miller said.