Palin says getting U.S. on right track 'a challenge' 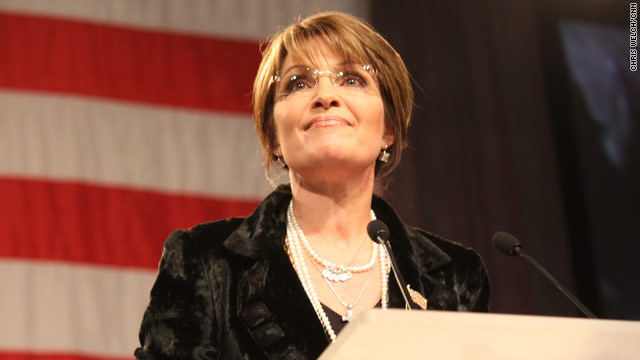 "It's not going to be easy. This is a challenge," she told the crowd. "The first task is to restore balance and common sense, and the first test will be at the ballot box in November."

The former Alaska governor and current conservative superstar headlined the event hosted by the Republican Party of Minnesota. Her last appearance in Minnesota was for her book tour in December.

Palin also offered a direct thank you to members of the Tea Party movement.

"I thank you for being part of this beautiful grassroots movement that's really sweeping across our country and it is full of common-sense conservatives who are ready to take our country back."

Palin has been an outspoken Tea Party supporter -- most recently speaking to a group in Democratic Sen. Harry Reid's hometown, encouraging disgruntled Americans to "take back our country" while attacking what she called the "Obama-Pelosi-Reid spending spree."

"Two years from now President Obama will be a one term president because we are going to elect the boldest, strongest, most courageous rock-ribbed constitutional conservative president this country has ever seen," Bachmann said.

Minnesota Gov. Tim Pawlenty revved up the crowd, asking: "Have you had enough?"

"We now live in a country where Wall Street gets a bailout and the poor get a handout -- and everybody else gets their wallet out," he said. "So I ask you, have you had enough?" The crowd shouted back, "Yes!"

Prior to Sen. John McCain, R-Arizona, choosing Palin as his running mate in 2008, Pawlenty was widely rumored to have been on the short list. Pawlenty and Palin are both said to be considering presidential bids in 2012.

"This is a great opportunity for our grass roots activists to come out together to see someone who embodies the best in conservative principles," state GOP spokesman Mark Drake said of Palin.

Later Wednesday evening, a private fundraiser will be held near the rally site. Tickets begin at $500 a head, but $10,000 will land you a photo op with Palin and Bachmann, according to state Republicans.

Up to $4,600 per individual can be given to Bachmann for her re-election campaign. If an individual gives more, the remainder goes to the state party.

Republicans, though, aren't the only ones looking to capitalize on the rally.

Tarryl Clark, a Democrat hoping to unseat Bachmann in November, urged followers to donate to her campaign on her Web site, writing that, "Michele Bachmann is using her best buddy Sarah Palin to try and scoop up the big bucks ... but to beat her -- we need you to join us today."

Since Bachmann's arrival in Washington in 2007, she's grabbed attention not so much for what she's accomplished as for controversial statements she has made.

In October, she told conservative bloggers at the Heritage Foundation that she refused to "cower in fear," and worry about media chatter. "They're irrelevant," she said of mainstream journalists. "And I don't play by their rules."

Speaking at the Conservative Political Action Conference in February, Bachmann blasted Obama's economic policies and declared that the president is leading America into a state of "decline."