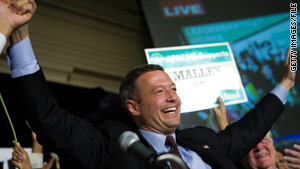 Martin O'Malley won the governorship in 2006.

Washington (CNN) -- This rematch is getting interesting.

Former Maryland Gov. Robert Ehrlich on Wednesday kicked off his bid to get his old office back. The person he's challenging is current Gov. Martin O'Malley -- the man who knocked him out of office four years ago.

"Welcome to history, part two," Ehrlich, a Republican, told a crowd in Rockville, Maryland, which is located in the heavily Democratic Montgomery County.

Ehrlich was scheduled to hold a rally later Wednesday in Baltimore County, the area he represented in Congress for eight years.

In 2002, then-Rep. Ehrlich upset Democratic Lt. Gov. Kathleen Kennedy Townsend to become Maryland's first Republican governor in over 30 years. But four years later, he lost his re-election bid to O'Malley, who at the time was Baltimore's mayor.

On the eve of Ehrlich's campaign kickoff, O'Malley offered to debate Ehrlich Saturday morning on a popular Baltimore radio station.

"I welcome Mr. Ehrlich back into the race for governor," the first-term Democratic governor said on his Facebook page. "I look forward to an issue-based discussion about ideas and issues that can keep our state moving forward. If Ehrlich accepts our challenge we are looking forward to an hour-long Saturday morning debate on Maryland's future on WBAL radio."

O'Malley was offering to debate Ehrlich in place of the weekly radio talk show Ehrlich co-hosts with his wife on WBAL each Saturday morning. Ehrlich responded by inviting O'Malley to appear on his radio program this Saturday.

"I look forward to playing host this Saturday as I have every Saturday for the past few years. Rather than bringing in a moderator to fill air time, I will personally host Gov. O'Malley for a one-on-one conversation," Ehrlich said.

Ehrlich's counteroffer was rejected by the governor.

"We regret that he did not take our offer in the spirit it was intended," said O'Malley campaign manager Tom Russell

As the campaigns get under way, national Democratic groups are also entering the fray. The Democratic Governors Association fired away at Ehrlich Wednesday.

"Marylanders already fired Bob Ehrlich for his poor performance, when they were the only voters in the country to pink slip an incumbent governor in 2006. Since then, he's done nothing to redeem himself -- in fact, he's done just the opposite as a special interest lobbyist," said DGA executive director Nathan Daschle, in an e-mail release.

Minutes after the DGA email, the Democratic National Committee highlighted a news article that featured a photo of Ehrlich with his former lieutenant governor, Michael Steele, who is now chairman of the Republican National Committee. Steele is currently under fire for his running of the RNC.

"Democratic governors throughout the nation have failed, and Gov. O'Malley is a prime exhibit of how, even in so-called blue states, voters are looking to conservatives like Bob Ehrlich for sound leadership," said RGA executive director Nick Ayers.