Ballparks, not ballrooms, locale of choice for campaign fundraisers 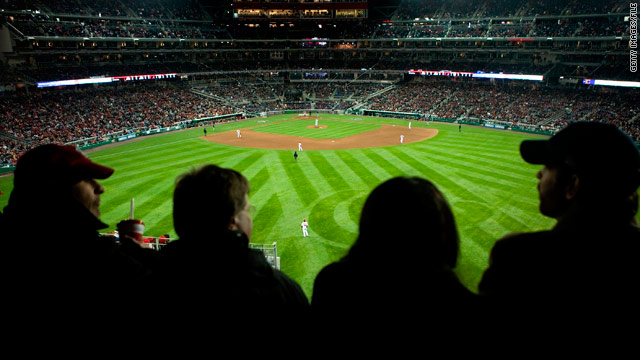 Nationals Park, which opened in March 2008, is also the host of political fundraising events.
STORY HIGHLIGHTS

Washington (CNN) -- When President Obama threw out the first pitch at the Washington Nationals' season opener on Monday, he kicked off not only a new baseball season but also a new round of fundraisers at Nationals Park.

Though Obama wasn't raising any cash himself on game day, his appearance was the backdrop for at least one ballpark fundraiser Monday, the first of what Nationals President Stan Kasten hopes will be many political events held at the stadium this season.

Since Nationals Park first opened in March 2008, Kasten has actively encouraged political operatives of all ideological stripes to hold their fundraisers and receptions at the ballpark, as opposed to more conventional venues such as restaurants or hotel ballrooms.

"I am absolutely bipartisan when it comes to business, or even multi-partisan," said Kasten in an interview with CNN. "We welcome all, and we've had all come to the ballpark. Republicans, Democrats, and I'm sure other parties as well."

Kasten helped bring major-league baseball back to Washington in 2005 after a 34-year absence. Since then, federal candidates, major political parties, and political action committees have spent at least $432,000 on fundraising events either at Nationals games or at their facility, according to campaign finance documents filed with the Federal Election Commission.

Although campaigns did spend money on Nationals-related fundraising events when the team played at RFK Stadium, the records show that spending skyrocketed once the gates opened at Nationals Park.

The total dollar amount spent on all fundraisers at Nationals Park is likely to be much higher than FEC records indicate, since lax federal disclosure rules allow campaigns to pay corporations directly for use of their luxury suites at the ballpark, without having to specify how the money was spent. However, regulations do require that campaigns pay full price for all expenses, such as tickets, suite rentals and concessions.

Much of the Nationals' success in wooing the campaign crowd can be attributed to a relative lack of variety available on the Washington fundraising circuit. One Democratic fundraiser who has held two events at the ballpark told CNN that both candidates and donors enjoy the change of scenery.

"It's different. It's a good time to interact with people but also have fun while doing something non-politically related," she said, speaking on the condition of anonymity. "There is a little bit of monotony in fundraisers in D.C. There's a formula to it, so this is a little out of the ordinary."

It's just so much more appealing to potential contributors than just coming to some hotel ballroom.
--Nationals President Stan Kasten
RELATED TOPICS

Kasten could not agree more.

"The key to fundraisers is to get people to come," he said. "We have the added element of holding an event at our ballpark and having a fun evening going on alongside the fundraiser with lots of other things to do."

"It's just so much more appealing to potential contributors than just coming to some hotel ballroom," he added.

The ballpark hosted over 40 fundraisers in 2009, and Kasten expects that number to increase this year with the midterm elections looming. The team advertises its facilities to individual campaign committees, congressional offices, and to national party organizations, including both the Democratic and Republican National Committees. Special outreach is made to the members and candidates representing whichever visiting team happens to be in town.

Although holding fundraisers at baseball games is not new, the Nationals have capitalized on being uniquely positioned in a city with a year-round political industry unrivaled by other baseball towns.

Records show that several teams with national fan bases have not received nearly as much in campaign expenditures as the $432,000 the Nationals have garnered so far. Since 2003, the Boston Red Sox have received about $207,000, the New York Yankees have received about $157,000, and the Chicago Cubs have brought in just over $36,000.

The Baltimore Orioles, which had been Washington's venue of choice for baseball-themed political fundraisers prior to the arrival of the Nationals, received $134,000 during the same time period.

But not everyone is sold on Nationals Park as a fundraising venue, at least as long as the team continues to perform poorly on the field.

"The allure of doing events at their games has worn off, since the home team isn't good. We usually struggle to sell tickets for Nationals games," said one Republican fundraiser, who asked not to be identified. "We generally advise our clients to have other types of fundraising events that are cheaper and more successful. [Washington Capitals hockey] games sell very well right now."

On that point, Kasten, who has also headed up professional hockey and basketball franchises, says that baseball is the most conducive sport for political fundraisers.

"The pace is a little slower," he said. "It gives people more of a chance to sit and think and talk typically than there is at a basketball or hockey game."

Despite his efforts to lure partisan fundraisers to his ballpark, the Nationals' top executive sees baseball as an inherently nonpartisan activity.

According to Kasten, "A ballpark is a controversy-free zone, a politics-free zone, where everyone can unify behind the idea of just having fun."