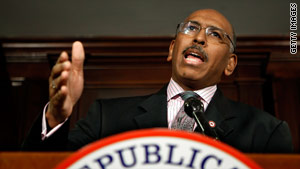 Washington (CNN) -- A nearly $2,000 bar tab at a bondage-themed Hollywood night club has continued to cast a shadow on the Republican National Committee and has raised questions over the ability of its chairman, Michael Steele, to lead the party to victory in November 2010.

Conservatives started criticizing Steele, the former lieutenant governor of Maryland, after he blasted radio talk show host Rush Limbaugh last year and later apologized. Some of the party faithful are also critical for his spending. And some fear he's not positioning the GOP well enough to hammer vulnerable Democrats in mid-term elections this fall.

Republican strategist Mary Matalin, noting the recent club tab controversy's effect on the chairman, offered Steele advice, saying he "needs to take a step back and ... raise some money and do some turnout and get the job done."

Matalin noted that he "could be a good chairman," but has to "clean up the act some." She added that Steele shouldn't step down, which would only lead to gloating from Democrats.

A conservative leader who describes himself as Steele's friend was critical of the organization.

"Increasingly, it appears that the RNC is tone-deaf to so many social conservatives ... whose homes they are calling every night looking for money," Tony Perkins, president of the Family Research Council, told CNN's Kiran Chetry on Thursday.

Video: More problems for the RNC?

Political analyst Bill Crane, with the public affairs firm CSI Crane, said that while the recent news is most likely to be a two- or three-day story, a string of other problems coming to light could have a big effect going forward.

Another minor incident came to light on Thursday, when it was reported that an RNC fundraising mail piece accidentally listed a phone sex number. The RNC blamed a vendor for the misprint, which gave the phone number with an 800 prefix instead of the Washington 202 area code.

Forcing Steele to step down would not be easy.

Candy Crowley, host CNN's "State of the Union," said that Steele's future is not determined by Republican and conservative leaders, but rather by the close to 170 members of the RNC.

"As long as Michael Steele stays on the right side of most of them, he is just fine," she said. "This isn't about party insiders. It is not about [House Minority Leader] John Boehner, or [Senate Minority Leader] Mitch McConnell and whether they talk to him or not."

There are two national committee members and a state chairman in each state who are essentially power players. If they are unhappy, observers note they will certainly let it be known. So far, though, there have been no calls by its members for Steele to step down.

"Here is the problem with the Republicans -- there is really no head of the Republican Party, per se," Crowley said. "There is no person that can go to Michael Steele and say, really, 'This is hurting.' "

Republicans are coming off of three major election wins under Steele's watch -- the governor's races in New Jersey and Virginia and Scott Brown's stunning Senate win in Massachusetts -- and into potentially pivotal mid-term races, Crowley said.

"I suspect at this point he is going to survive this," Crowley said. "Maybe he doesn't go into next year or maybe he goes into the first of next year but [Republican party officials] think he will certainly go through this election."

Perkins, who first made mention of his distaste with the latest RNC news in his "Washington Update" column on the organization's Web site, is now urging supporters to stop donating to the RNC. Instead, he wants donors to give to his organization's war chest or candidates they support.

The Republican Governors Association also sent a message to its donors on Thursday.

"The smart money is with the RGA this year," Nick Ayers, executive director of the RGA, said in a statement announcing the organization's latest fundraising numbers. "We are receiving a record number of donations from supporters at all levels because they are confident in our strategy and know we will win back a majority of governorships this November."

The RNC is also facing some backlash from a popular conservative figure.

Sarah Palin recently asked the RNC to remove her name from an invitation suggesting she may attend a series of committee fundraising events timed to coincide with next week's Southern Republican Leadership Conference in New Orleans, Louisiana.

Though Palin will speak on Friday at the SRLC, a gathering of top Republican officials and an early cattle call for potential 2012 presidential candidates, the former Alaska governor will not be participating in any RNC fundraising event, a Palin adviser told CNN.

Palin's staff has twice asked the RNC to remove her name from the invitation, the adviser said, adding that the request had nothing to do with the nightclub controversy currently making headlines.


CNN's Peter Hamby and Mark Preston contributed to this report.