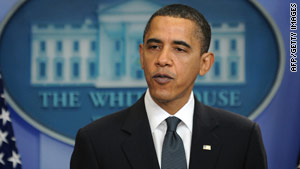 "The Republican Party has taken a position where they're going to try and slow and block progress on all fronts, whether it's legislation or appointments," David Axelrod told the CNN program "State of the Union."

Axelrod noted that the previous administration had fewer appointees awaiting Senate confirmation at the same point after taking power.

"We have 77 appointees who have not gotten the [Senate] vote because they have been held up by the Republican Party," Axelrod said. "Some of them are in very sensitive positions -- Treasury, Homeland Security, and boards like the Labor Relations Board ... where there are a huge number of vacancies."

Much of the controversy over Obama's decision to use his authority to make recess appointments focused on Craig Becker, a union lawyer nominated to the National Labor Relations Board.

Becker, currently the associate general counsel with the Service Employees International Union and the AFL-CIO, is one of two recess appointees to the board, which oversees relations between unions and employers. The chamber's 41 Republicans asked Obama in a letter last week to refrain from making Becker a recess appointment.

Previously, two conservative Democratic senators had joined Republicans in a filibuster of Becker's appointment. Now, Republicans and business groups are criticizing the Becker appointment as circumventing the Senate and bowing to pressure from labor allies.

Now, Republicans and business groups criticize the Becker appointment as circumventing the Senate and bowing to pressure from labor allies.

The U.S. Chamber of Commerce said in a statement that "Mr. Becker's prolific writings ... suggest a radical view of labor law that flies in the face of established precedent and case law and is far outside the mainstream."

Sen. Lamar Alexander, R-Tennessee, complained that consideration of presidential nominees is an important role for the Senate.

"What it's called is checks and balances," Alexander, chairman of the Senate Republican Conference, told CNN. "And what the president has done here is throw fuel on the fire at a time when ... the debate about politics is a very angry debate to begin with."

In a statement announcing the recess appointments, Obama said he needed to act because Republicans were refusing to exercise their legislative responsibility in the interest of scoring political points.

"Most of the men and women whose appointments I am announcing today were approved by Senate committees months ago, yet still await a vote of the Senate," Obama said in the statement issued Saturday. "At a time of economic emergency, two top appointees to the Department of Treasury have been held up for nearly six months. I simply cannot allow partisan politics to stand in the way of the basic functioning of government."

"The President shall have Power to fill up all Vacancies that may happen during the Recess of the Senate, by granting Commissions which shall expire at the End of their next Session," states Article II, Section 2. Such appointees can serve without confirmation through the rest of the current session of Congress.

President Bill Clinton made 139 recess appointments during his two terms in office, and President George W. Bush made more than 170, according to the Congressional Research Service.