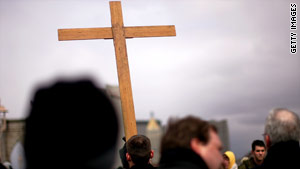 (CNN) -- A group of more than 100 prominent Christians ranging from evangelical minister Jim Wallis on the political left to Nixon White House aide Chuck Colson on the right released a document Thursday calling for an end to the fight club tone of the national political discourse.

Called the "Civility Covenant," the document says that churches have too often "reflected the political divisions of our culture rather than the unity we have in the body of Christ."

"Members of Congress have been calling me saying 'It's never been as bad as it is now, but we can't do much about it because we're not credible to a lot of Americans,'" said Wallis, who leads the progressive group Sojourners. "They said to the faith community, 'please help us.'"

Wallis said the covenant is the result of those conversations. It has 114 signatories from a broad swath of Christian traditions, including the president of the National Association of Evangelicals, the head of the National Hispanic Christian Leadership Conference and the general superintendent of the Assemblies of God, a major Pentecostal denomination.

The list also includes plenty of strange political bedfellows, from conservative Christian leaders like Harry Jackson -- who led the unsuccessful fight against gay marriage in Washington -- to Morna Murray, president of the progressive Catholics in Alliance for the Common Good, which is close to the Obama White House.

"Anytime you have a document with Wallis and Colson signing, you're talking about a pretty unusual situation and a pretty significant marker," said John Green, an expert on religion and politics at the University of Akron in Ohio. "It shows that there are some issues that transcend politics and ideology."

Quoting the New Testament, the new covenant urges Christians to "put away from you all bitterness and wrath and anger and wrangling and slander, together with all malice, and be kind to one another, tenderhearted, forgiving one another, as God in Christ has forgiven you."

"We owe a certain responsibility to each other as believers," said Colson, an influential evangelical Christian voice. "This doesn't mean I haven't challenged some people's theology. But the document says we're not going to challenge each other's motives or engage in ad hominem attacks."

Wallis, who led the effort to draft the document and collect signatures for it, noted that the document comes at a time when members of Congress are complaining of physical threats against them because of their positions on the health care bill, which President Obama signed into law Tuesday.

The pastor publicly feuded with conservative television host Glenn Beck this month after Beck encouraged his fans to leave churches that preach economic and social justice. Wallis organized a boycott of Beck's show but says the timing of the covenant's release is incidental.

Colson said the document "wouldn't apply to Glenn Beck because we're talking about the conversation in the family of believers ... Glenn Beck is a Mormon."

Many Christians don't consider Mormons -- members of the Church of Jesus Christ of Latter-day Saints -- to be Christians, though Mormons consider themselves Christian.