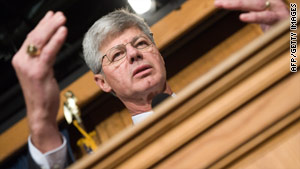 Rep. Bart Stupak of Michigan and 12 other House Democrats attended the signing of the executive order.
STORY HIGHLIGHTS

Unlike the signing of the health care bill Tuesday -- which was conducted under the glare of television cameras -- Wednesday's event was closed to the news media.

It was attended by Rep. Bart Stupak of Michigan and 12 other House Democrats opposed to abortion rights, without whose help the landmark overhaul bill would not have passed, political observers say.

"While the legislation as written maintains current law, the executive order provides additional safeguards to ensure that the status quo is upheld and enforced, and that the health care legislation's restrictions against the public funding of abortions cannot be circumvented," the White House said previously.

Stupak said the order makes very clear that the current law applies to the new law.

"I have said from the start that my goal was to see health care pass while maintaining the principle of the sanctity of life," he said Tuesday.

At one point, the abortion issue nearly derailed the reform bill. But after Obama promised the executive order, the anti-abortion Democrats switched their votes to "yes" to help pass the measure pass 219-212 on Sunday night.

Stupak had led the anti-abortion Democrats in opposition to the new health care law because, he claimed, it would allow federal funding for abortions beyond the current limits of cases of rape or incest, or if the woman's life is in danger.

The controversy centered on whether the bill would force all taxpayers into paying for abortions, by subsidizing insurance policies that pay for the procedure and by funding federal health clinics that might offer abortions.

Leading up to the vote Sunday night, the main focus of anti-abortion activists was the insurance "exchanges" created by the law, the new marketplaces in which businesses and individuals will be able to buy insurance.

Under the exchanges, there must be a plan that offers abortion coverage and another that doesn't, according to the measure.

To appease abortion opponents, Democrats also added language requiring anyone whose policy does cover abortion to pay -- separately -- a small surcharge, with the funds kept separate.

Stupak and other abortion opponents also complained about a lack of anti-abortion restrictions for new, federally run community health clinics, which would receive $7 billion under the legislation.