Source: Pentagon set to ease policy on gays in the military 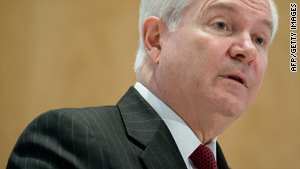 The official said one of the changes will be that outings by third parties may no longer be clear grounds for initiating separation proceedings, especially if it is proven that the person making the allegation has a grudge against the military member.

Gates' announcement will focus on regulatory changes that can be made at the Pentagon without the approval of Congress, which has been debating whether to change the policy.

President Obama has asked for a repeal of the measure.