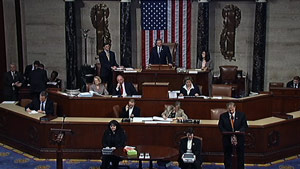 The House passed the bill in a 219-212 vote on Sunday.
STORY HIGHLIGHTS

Follow the very latest on the health care vote and find out what it means for you, tonight on CNN. Watch a special live prime-time event at 8 p.m. ET on CNN, with the best political team on television.

Washington (CNN) -- President Obama won a historic victory in the struggle for health care reform Sunday as the House of Representatives passed a sweeping bill overhauling the American medical system.

The bill passed in a 219-212 vote after more than a year of bitter partisan debate. All 178 Republicans opposed it, along with 34 Democrats.

The measure, which cleared the Senate in December, will now go to Obama's desk to be signed into law. It constitutes the biggest expansion of federal health care guarantees since the enactment of Medicare and Medicaid more than four decades ago.

A separate compromise package of changes expanding the reach of the measure also passed the House over unanimous GOP opposition, and is now set to be taken up by the Senate.

The overall $940 billion plan is projected to extend insurance coverage to roughly 32 million additional Americans. It represents a significant step towards the goal of universal coverage sought by every Democratic president since Harry Truman.

Most Americans will now be required to have health insurance or pay a fine. Larger employers will be required to provide coverage or risk financial penalties. Total individual out-of-pocket expenses will be capped, and insurers will be barred from denying coverage based on gender or pre-existing conditions.

Video: Health reform: Not all at once
RELATED TOPICS

Numerous House members insisted they would not back the Senate bill without a clear promise that senators would approve the changes.

The rare Sunday vote occurred after a long weekend of intense negotiations between the White House, House leaders and individual congressmen. Obama traveled to Capitol Hill Saturday to make a last-minute plea to the entire House Democratic caucus. He spent much of the last week trying to personally convince dozens of members.

She also brokered a last-minute deal among several Democrats worried about disparities in Medicare funding for individual states.

Republicans failed to stop the Democratic health care initiative despite utilizing almost every weapon in their legislative arsenal. GOP leaders repeatedly have warned the plan will lead to a government takeover of America's private employer-based health care system.

They have also argued it will lead to higher premiums and taxes while imposing harsh Medicare cuts and doing little to control spiraling medical costs.

Shortly before the House voted on the bill, Pelosi said health care reform was necessary to end insurance industry abuses and bring greater economic stability to most Americans.

Congress will be "making history, making progress and restoring the American dream" by passing reform, she said.

It it time to "complete the great unfinished business of our society." Health care "is a right and not a privilege," she said.

House Minority Leader John Boehner, R-Ohio, argued that Democratic leaders had betrayed the trust of the public by pushing ahead with a bill that lacks broad public support.

He also slammed what he characterized as a legislative process marked by a lack of transparency and accountability.

"Look at how this bill was written," he said, his voice steadily rising. "Can you say it was done openly? With transparency and accountability? Without back room deals that were struck behind closed doors? ... Hell no you can't!"

The $875 billion bill now headed to Obama's desk is projected to cut the federal deficit by $118 billion over the next 10 years, according to the nonpartisan Congressional Budget Office.

If the compromise plan clears the Senate, the bill's total cost will rise by $65 billion. Projected deficits, however, will be reduced by another $25 billion.

Key details of the bill

The plan, according to CBO projections, will cut budget deficits by over $1 trillion in its second decade.

It will subsidize insurance for a family of four making up to roughly $88,000 annually, or 400 percent of the federal poverty level.

It also creates a series of health insurance exchanges designed to make it easier for small businesses, the self-employed and the unemployed to pool resources and purchase less expensive coverage.

Medicaid will be significantly expanded, ensuring coverage to those earning up to 133 percent of the poverty level, or just over $29,000 for a family of four.

The bill cuts projected Medicare spending by roughly $500 billion, in part through reductions in the Medicare Advantage program. Democratic leaders have promised the reductions will not affect service to Medicare recipients.

The bill hikes Medicare payroll takes on families making more than $250,000. Starting in 2013, it also imposes a 40 percent tax on insurance companies providing expensive "Cadillac" health plans valued at more than $8,500 for individuals and $23,000 for families.

Proponents of the tax on high-end plans argue it's one of the most effective ways to curb medical inflation. However, many Democrats oppose taxing such policies because it would hurt union members who traded higher salaries for more generous health benefits.

If the compromise bill becomes law, the threshold for imposing the Cadillac tax will be raised to health plans valued at over $10,200 for individuals and $27,500 for families. The tax won't kick in until 2018.

Buy insurance or pay a fine

Under the plan now headed to Obama, individuals are required to purchase health insurance coverage or face a fine of up to $750 or 2 percent of their income -- whichever is greater. It includes a hardship exemption for poorer Americans.

Companies with more than 50 employees that don't provide coverage are required to pay a fee of $750 per worker if any of its employees rely on government subsidies to purchase coverage.

The compromise package would drop the individual fine to $695 or 2.5 percent of income, whichever is greater. The fine on companies failing to provide coverage would jump to $2,000 per employee.

Federally funded abortion coverage for people purchasing insurance through the exchanges will be banned under the bill now passed by Congress. Exceptions will be made in cases of rape, incest, or danger to the life of the mother.

Illegal immigrants will be barred from buying insurance in the health insurance exchanges.

Parents, however, will be entitled to keep their children on their health care plans until age 26.

While passage of the Senate bill is a major win for Democrats on a major party priority, Pelosi had to take a number of steps in recent weeks to assuage House members unhappy with the measure.

A deeply unpopular special exemption for Nebraska from all new Medicaid expenses -- known as the "Cornhusker Kickback" -- would be eliminated under the compromise plan. The federal government will instead assist every state by picking up 100 percent of the costs of expanded Medicaid coverage between 2014 and 2016, and 90 percent starting in 2020.

The speaker also tried to sweeten the deal for some progressive members of her caucus partly by adding additional subsidies and a major student loan reform measure to the compromise plan.

The reform measure -- a priority for Obama -- would end the practice of having private banks offer student loans and would expand direct lending from the government.

In addition, the compromise plan closes the Medicare prescription drug "doughnut hole" by 2020. Under current law, Medicare stops covering drug costs after a plan and beneficiary have spent more than $2,830 on prescription drugs. It starts paying again after an individual's out-of-pocket expenses exceed $4,550.

Senior citizens stuck in the doughnut hole this year would receive a $250 rebate.

A key group of anti-abortion rights Democrats was reassured by a last-minute promise of an executive order from Obama stating that the provisions in the health care bill comply with the 32-year-old Hyde Amendment, which sharply restricts federal funding for abortion.

Several fiscally conservative Democrats, meanwhile, were assuaged by the CBO's estimate of the bill's long-term impact on the federal deficit.

The speaker considered trying to help unhappy House Democrats by allowing them to avoid a direct vote on the Senate bill. Numerous congressmen had advocated passing a rule that would have deemed the Senate bill approved once the separate package of changes had passed.

GOP leaders objected furiously to the so-called "deem and pass" maneuver. House leaders backed away from the idea on Saturday.

Republicans are still fuming over Democrats' decision to use a legislative maneuver called reconciliation, which will allow the compromise measures to clear the Senate with a simple majority of 51 votes.

House Democrats have been continually reassured that the compromise package will be approved by the more conservative Senate. Pelosi said Friday that "when our members go to vote, they will have all the assurances they need" that the Senate will approve the compromise plan.

Senate Majority Leader Harry Reid, D-Nevada, attended the Saturday meeting between Obama and House Democrats. He presented a letter indicating that the Senate would use reconciliation to pass the House's changes.

"We believe that health insurance reform cannot wait and must not be obstructed," the letter said. "We support an up-or-down majority vote and will vote to make these improvements."

The letter was not signed, though Reid told the House members a majority of the Senate now backs reconciliation.