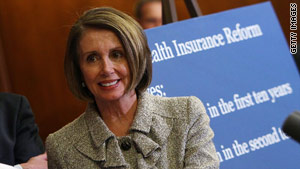 • New health insurance subsidies would be provided to families of four making up to $88,000 annually, or 400 percent of the federal poverty level.

• Health insurance exchanges would be created to make it easier for small businesses, the self-employed and the unemployed to pool resources and purchase less expensive coverage.

• Total out-of-pocket expenses would be limited, and insurance companies would be prevented from denying coverage for pre-existing conditions. Insurers would be barred from canceling coverage for sick people, as well as charging higher premiums based on a person's gender or medical history.

• Insurers would be required to provide coverage for non-dependent children up to age 26.

• The Medicare prescription drug "doughnut hole" would be closed by 2020. Under current law, Medicare stops covering drug costs after a plan and beneficiary have spent more than $2,830 on prescription drugs. It starts paying again after an individual's out-of-pocket expenses exceed $4,550.

• A 40 percent tax would be imposed on insurance companies providing "Cadillac" health plans valued at more than $10,200 for individuals and $27,500 for families. The tax would kick in starting in 2018.

• The federal government would assist states by picking up 100 percent of the costs of expanded Medicaid coverage between 2014 and 2016, and 90 percent starting in 2020.

• Individuals would be required to purchase coverage or face a fine of up to $695 or 2.5 percent of income, whichever is greater, starting in 2016. The plan includes a hardship exemption for poorer Americans.

• Companies with more than 50 employees would be required to pay a fee of $2,000 per worker if the company does not provide coverage and any of that company's workers receives federal health care subsidies. The first 30 workers would be subtracted from the payment calculation.

• States could choose whether to ban abortion coverage in plans offered in the health insurance exchanges. Individuals purchasing plans through the exchanges would have to pay for abortion coverage from their own funds. Some socially conservative Democrats have complained that the plan does not do enough to ensure that taxpayer money is not used to fund abortions.