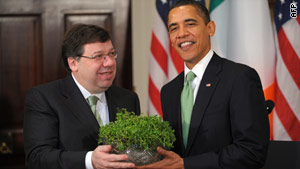 (CNN) -- It was a balmy March day in Washington as the Irish ambassador to the U.S. headed to the White House. He carried a small gift for the president: a box of Irish shamrock in honor of St. Patrick's Day.

The year was 1952. The president, Harry Truman, was out of town. So the ambassador, John Joseph Hearne, dropped off the shamrock and went on his way.

Such was the inauspicious inception of what's become a perennial event: the St. Patrick's Day shamrock ceremony, in which the U.S. president receives a cluster of Ireland's most famous greenery on the feast day of Ireland's patron saint.

As presidential holiday traditions go, it may not be as prominent as lighting the National Christmas Tree, hosting the Easter Egg Roll or even pardoning the Thanksgiving turkey. But it's just as routine and reliable as other rituals, and it has a unique history.

At the time of Hearne's visit to the White House, St. Patrick's Day in the United States was largely an ethnic affair, observed by those of Irish descent and few others. The main event was in New York, the site of the country's oldest and largest St. Patrick's Day parade (which Truman attended in 1948, becoming the first U.S. president to do so). But in Washington, the holiday was more low-key.

"St. Patrick's Day centered around the Irish-American community," explained Michael Kennedy, the executive editor of Ireland's "Documents on Irish Foreign Policy" project. "The minister in Washington might attend a Mass and then a dinner hosted by an Irish society, but he would not go to the White House."

That changed soon after Ireland became an independent republic, and Hearne arrived on the scene as the country's first official ambassador to the U.S.

"Hearne moved St. Patrick's Day up the political agenda and brought it from Irish-America to all of America," said Kennedy.

And Hearne did have a political agenda.

Ireland was not yet a member of the United Nations, was not part of NATO and remained officially neutral throughout the Cold War. So giving an annual gift to the U.S. president, and providing him with a photo opportunity that might please Irish-American voters, was a way to curry favor with the United States without formally taking sides.

Ireland "wanted to restore and reinforce her pro-Western credentials with Washington," Kennedy reasoned. "I think Hearne had Cold War politics and alignment, as well as serving the Irish diaspora, in mind."

There were also economic motives.

Mike Cronin, author of "The Wearing of the Green: A History of St. Patrick's Day," noted that Ireland launched a campaign to attract more U.S. tourists right around the time the first shamrock ceremony took place.

"It really has more, in its origins at least, to do with the promotion of Ireland as a tourist venue," he surmised, "and hence income for the Irish state."

By 1953, with Dwight Eisenhower in the White House, the low-key shamrock presentation of the previous year began to resemble the ceremony we know today.

A gift that had been dropped off was now presented to the president in person. The small box containing a few sprigs of shamrock evolved into a custom-made Waterford crystal bowl full of sprouts, specially flown in for the event. And what had been a holiday for the Irish to honor their heritage became an annual occasion for American and Irish leaders to celebrate their country's close ties.

Over the years, the ceremony's prominence waxed and waned. The media paid scant attention during the Eisenhower years, but the shamrock presentation became a full-blown media event when John F. Kennedy, himself an Irish-American, entered the White House. Interest diminished after his death, but his successor, Lyndon Johnson, gamely kept the tradition alive.

The event took on new political significance during Richard Nixon's administration, as "The Troubles" escalated in Northern Ireland. The conflict between Northern Ireland nationalists and British-backed loyalists provoked strong emotions on both sides of the Atlantic. So the Republic of Ireland's annual audience with the U.S. president became an important way to cultivate a strong transatlantic relationship.

After the 1969 ceremony, Cronin recounted in his book, the Irish ambassador reported back to Dublin that "this was certainly one of the most successful, and from the public relations point of view, most important ceremonies of its kind in which I have participated."

In the 1970s, the occasion settled into a more routine, minor event on the schedule for Gerald Ford and Jimmy Carter. Carter even delegated the task to his vice president one year, when he was preoccupied with negotiating 1979's Israel-Egypt peace treaty.

Ronald Reagan, however, was fond of extolling his Irish roots, so his arrival in the White House helped transform St. Patrick's Day in Washington into a jovial, celebratory, all-day affair.

By then, the nation's capital was hosting its own parade, and the shamrock ceremony was soon joined on the schedule by an annual congressional St. Patrick's Day luncheon in the U.S. Capitol, hosted by House Speaker Tip O'Neill.

After Reagan, George H.W. Bush accepted the shamrock for four years. But it was Bill Clinton who took the ceremony to a new level.

Clinton set a precedent by meeting only with Irish prime ministers, not lower-ranked shamrock-bearers. And he used the occasion to highlight his commitment to helping with the Northern Ireland peace process.

He began hosting lavish St. Patrick's Day receptions and inviting Northern Ireland politicians to the party. His efforts helped lead to the 1998 Good Friday Agreement, aimed at solving "The Troubles" for good.

By the time Clinton left office in 2001, the shamrock ceremony and its ancillary events had such political overtones that George W. Bush deliberately toned down the celebration as a way of signaling his intention to limit his administration's involvement with Northern Ireland.

The ceremony returned to its roots, a simple set piece in which the participants wore green ties, posed with a bowl of shamrock and exchanged pleasantries about U.S.-Ireland relations.

Bush speechwriter Matthew Scully even publicly complained that crafting remarks for the event had become "boring."

"How many different ways can you accept a bowl of shamrocks, or celebrate the sterling qualities of the noble Irish people?" he griped to The New York Times.

When the Irish prime minister had not yet received a White House invitation by late February 2009, Irish politicians fretted President Obama might abandon the tradition. But the invite did eventually come, and Obama made clear his commitment to continuing the ritual, calling it "an affirmation of one of the strongest bonds between peoples that exist in the world."

Ireland, too, is committed to sustaining the custom. A 2009 official government report on U.S.-Ireland relations cited the importance of the shamrock ceremony: "Over the years these occasions have given Ireland generous access to the president ... access that few other countries of our size enjoy."

But after nearly 60 years of St. Patrick's Day ceremonies, what's actually become of all those bowls of shamrock?

Ronald Reagan used one of his Waterford bowls to hold jelly beans. Bill Clinton displayed his glassware in the White House.

"Upstairs in our residence, there is so much Irish crystal now," he mock-lamented at his eighth and final shamrock ceremony.

As for the shamrock itself, it has a short shelf life after its long journey from Ireland.

White House security regulations dictate that any food, drink or plant presented to the president be "handled pursuant to Secret Service policy." That's Secret Service-speak for destroyed -- an unceremonious fate, for an enduring symbol of a long friendship.