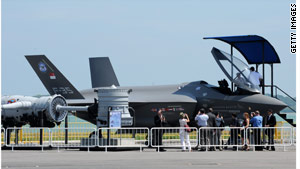 The cost of the F-35 aircraft has gone from $50 million a jet in 2001 to about $113 million.
STORY HIGHLIGHTS
RELATED TOPICS

Washington (CNN) -- The cost of the Pentagon's newest fighter jet will be more than double the original price, solidifying the F-35 joint strike fighter as the most expensive Pentagon weapons program ever.

At a Capitol Hill hearing on Thursday, the Pentagon's chief weapons buyers said numerous problems over the almost 10-year program have forced the cost of the aircraft to go from $50 million a jet in 2001 to about $113 million.

That cost overrun has also forced the Pentagon to justify the program to Congress.

Outrage about the cost among the Senate panel was expected, including that from the chairman of the Armed Service Committee, Sen. Carl Levin, D-Michigan.

"This committee has been a strong supporter of the JSF program from the beginning, however, people should not conclude that we're going to be willing to continue that strong support without regard to increased costs coming from poor program management," Levin said.

Sen. John McCain, R-Arizona, the ranking member, had been pushing for a hearing on the program.

"The taxpayers are a little tired of this, and I can't say that I can blame them," McCain said.

"It's a bit frustrating to hear the secretary of defense as short a time ago as last August to tell us that everything is OK," McCain said.

McCain was referring to a visit to the joint strike fighter assembly plant last year where Secretary of Defense Robert Gates said most of the high risk elements associated with JSF's developmental program were largely in the past, according to McCain.

The Pentagon wants to buy more than 2,400 of the technologically advanced aircraft.

The F-35 program has had numerous technical problems, delays and slow productivity over the years, including an entire program restructuring in an attempt to reduce the skyrocketing cost.

Undersecretary of Defense for Acquisition Ashton Carter told the Senate panel that the program has fallen short on performance in the past few years. "That is unacceptable," he said.

Despite that, the fighter jet program still enjoys strong support from service chiefs and congressional members because it touches numerous states.

The Pentagon's director of cost assessment and program evaluation, Christine Fox, told the senators she expects the Pentagon will officially notify Congress under the Nunn-McCurdy regulation by April 1.

The plane was designed to be the next generation fighter for the military and would have three variants. The Navy would have one for its carrier fleet, the Marines would use it to replace their aging Harrier jump jet fleet and the Air Force would use it as the service phases out the F-16 and F-15 fighter jets.

The planes are being built by Lockheed Martin, and the program also has international partners who have been building parts for the aircraft.

More than 700 of them would be sold to those partner countries, including the United Kingdom, Italy, the Netherlands, Turkey, Canada, Denmark, Norway and Australia.

The fighter is the largest weapons program ever and Gates has been counting on it, as there are no immediate alternative programs to the F-35.

Even with the delays and cost overruns, the first planes are expected to be put into service as early as 2012 for the Marine Corps.

Even as the program tries to field an aircraft in less than two years, a Government Accountability Office (GAO) official testified at the hearing that there are still no final costs associated with the program through its projected life ending in 2034.

"To date, the department does not have a full, comprehensive cost estimate for completing the program," said Michael Sullivan, director of the acquisition and sourcing management team for the GAO.