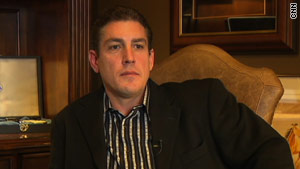 Some are accusing Jon Scott Ashjian, a new Tea Party candidate running for U.S. Senate, of being a fake.
STORY HIGHLIGHTS
RELATED TOPICS

(CNN) -- It's a grass-roots protest movement composed of the newly politicized and people distrustful of hierarchy. So how is it possible to be an illegitimate Tea Party member?

Ask Republicans in Nevada. Some are accusing Jon Scott Ashjian, a new Tea Party candidate running for U.S. Senate, of being a fake. The allegation? He was put in the race by agents of Senate Majority Leader Harry Reid to siphon votes from the GOP.

"No doubt about it," says Danny Tarkanian, one of the many Republican Senate candidates hoping to challenge Reid in November.

"Nobody in the Tea Party knows who he is. He didn't know any of the principles of the Tea Party," Tarkanian tells CNN.

Tarkanian even accuses "Harry Reid's staff, campaign, whatever" of picking Ashjian because he's Armenian, as is Tarkanian. He explains, "They know the Armenians are very close, they'll vote for each other."

As for Reid, an aide dismisses the accusations. As does Reid, who says he's never met Ashjian or "anyone in his family." Reid tells CNN, "I think there are too many conspiratorialists in the world today. This is a free country."

Sue Lowden, the Republican front-runner in the Senate primary, according to recent polls, is the former Nevada Republican Party chair and seems to be the Republicans' best hope of unseating Reid in November. Or at least she did, until Ashjian got into the race.

Lowden says she's been very active with Tea Party groups in Nevada. "I am a Tea Party voter, absolutely." Which is why she says she finds it "a little strange" that Ashjian is emerging now. "I don't know who this person is. He's never been involved with anything that I'm aware of in this state."

She doesn't know if he's a spoiler. "We'll find out for sure," she promises, adding, "I've never seen him at one of our Tea Parties, by the way."

It's clear why Lowden and Tarkanian would be concerned. A recent poll conducted for the Las Vegas Review-Journal indicates Lowden and Tarkanian each beating Reid in one-on-one hypothetical general election matchups. But add a Tea Party candidate to the ballot, and that siphons off enough conservative votes to give Reid a narrow victory. According to the survey, Reid would grab 36 percent of the vote, the Republican candidate 32 percent and the Tea Party candidate 18 percent in a possible three-way showdown.

So the conspiracy theories abound from Tea Party activists and worried Republicans: Ashjian's never attended Tea Party rallies; he hasn't coordinated with local organizers; the secretary of his Tea Party of Nevada, Barry Levinson, is a registered Democrat. Levinson said, "I vote the person, not the party" and calls the accusations "political garbage."

But to critics, it's all proof that Ashjian is, in the words of Nevada Tea Party activist and blogger Ned Barrett, running a "false flag operation."

Jon Scott Ashjian seems to find the fuss amusing. New to the political scene, he personally gave CNN directions to his house for an interview that his wife, daughter and bulldog attended. He said it was the first time he'd spoken with the national media. Ashjian, who helped form the Tea Party of Nevada just to run for this seat, said that he'd never take marching orders from the Democrats or Reid.

"I have never met Harry Reid, do not agree at all with any of his political values," Ashjian said, adding that he's not the kind of guy "who would follow or be told what to do."

He says he's fielded endless calls from Republicans trying to strong-arm him to leave the race, and he resents it: "I don't think Republicans own the Tea Party," Ashjian said. "In fact, I know they don't in Nevada, because I do. That's what's really got them in an uproar." He said he's been told that he's not welcome on the bus when the Tea Party rolls into Nevada.

Ashjian says he got into the race because "we are patriots that want change. We're normal people that want to make a difference."

First, he plans to make a campaign Web site.

A spokesman for Tea Party Express, a national Tea Party group that is encouraging efforts to defeat Reid at the ballot box in November, says it does not view Ashjian as a serious candidate.

They say he's not speaking at either of their two rallies in Nevada on March 27, when they kick off their third Tea Party cross-country caravan with events in Searchlight (Reid's hometown) and Las Vegas, but they say he's welcome to attend. Tea Party Express also says it is not endorsing any candidate in the Nevada GOP Senate primary.