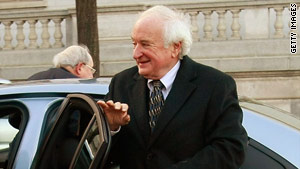 Rep. Sander Levin has been a ranking member of the House Ways and Means Committee.
STORY HIGHLIGHTS

The Ways and Means Committee is responsible for crafting tax legislation.

Levin replaces Rep. Charlie Rangel, D-New York, who temporarily stepped aside Wednesday until the conclusion of an ongoing ethics investigation.

"In order to avoid my colleagues' having to defend me during their elections, I have this morning sent a letter to Speaker Pelosi asking her to grant me a leave of absence until such time as the ethics committee completes its work," Rangel said Wednesday.

In a statement, Pelosi said she had accepted Rangel's request and praised the congressman for "his decades of leadership on jobs, health care and the most significant economic issues of the day."

The night before, Rangel said he had no plans to leave his powerful post.

Rangel is being investigated for, among other things, failing to pay taxes on a home in the Dominican Republic. The congressman also has admitted failing to report several hundred thousand dollars in assets on federal disclosure forms.

In addition, he is under scrutiny for the purported misuse of a rent-controlled apartment for political purposes, as well as for allegedly preserving tax benefits for an oil-drilling company in exchange for donations to a project he supported at the City College of New York.

Rangel was formally admonished Friday by the House ethics committee for violating rules on receiving gifts. Specifically, the committee found that Rangel violated House gift rules by accepting reimbursement payments for travel to conferences in the Caribbean in 2007 and 2008.

House Republicans issued a statement after Rangel's announcement, calling his decision to temporarily step aside an "embarrassing episode" for the Democratic majority.

"Nancy Pelosi's promise to run the 'most ethical Congress in history' has been reduced to a punch line, and as a result she is presiding over a caucus in chaos," GOP spokesman Ken Spain said. "The Democrats -- under Speaker Pelosi's leadership -- are incapable of leading the United States Congress."

House Democrats have blocked previous GOP resolutions on the House floor, but several Democrats in competitive districts have come out publicly in recent days, saying they thought it was time for Rangel to step down.

Rangel is a founding member of the Congressional Black Caucus, which has 42 members in the House.

CNN's Brianna Keilar and Deirdre Walsh contributed to this report.