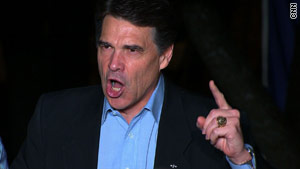 Hutchison called Perry to concede the race after returns indicated that the governor was cruising toward a resounding victory in the closely-watched primary.

"Now we must unite," she said. "We must win Texas for Republicans."

Perry's win ended a yearlong intra-party fight that was billed from the start as a clash of Texas political titans but ended with a whimper as Hutchison struggled to fight a tide of anti-Washington sentiment among conservatives.

The governor cast his victory as a warning shot to Washington in the mold of recent GOP wins in the Virginia and New Jersey governor's races and the Massachusetts special Senate election.

"I think the message is pretty clear," Perry told supporters at his election night party near Austin. "Conservatism has never been stronger than it is today."

Perry said the message to Washington was simple: "Quit spending all the money," he said. "Stop trying to take over our lives and our businesses."

He added: "Stop messing with Texas!"

Perry, the longest serving governor in Texas history, is seeking a third full term in Austin. His opponent in the general election will be Democrat Bill White, the former Houston mayor who dispatched six opponents in the Democratic primary.

With nearly two-thirds of precincts reporting, Perry maintained a 20-point lead over Hutchison and appeared to be on pace to cross the crucial 50 percent mark needed to avoid a six-week runoff election against the three-term senator, who began her gubernatorial bid as the prohibitive frontrunner but stumbled as Perry's campaign cast her as a big-spending Washington insider.

GOP activist Debra Medina, a conservative with strong support among Tea Party activists, looked to be headed for a third place finish.

White, the popular former three-term mayor of Houston, the country's fourth-largest city, predicted that Perry will try to nationalize the race and tie him to unpopular Democratic agenda items in Washington.

"He'll run against President Obama," White said in an interview. "That's probably for his own political career. I think he wants to run for president. I'm just running for the people of Texas. It shouldn't be about a party or who's doing what to whom in Washington."