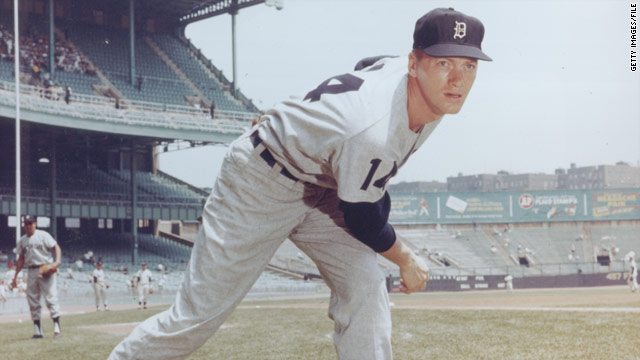 As a major league pitcher, Jim Bunning challenged hitters just as he is now challenging other lawmakers.
STORY HIGHLIGHTS

Washington (CNN) -- Sen. Jim Bunning was called one of the nation's five worst U.S. senators by Time magazine in 2006 and as a baseball player became one of the few pitchers to anger Mickey Mantle enough to make him charge the mound.

Over the last week, his block of an extension of unemployment benefits has angered much of America.

The Senate reached agreement Tuesday night to end Bunning's filibuster of a measure that would extend $10 billion in benefits for unemployed workers and funding for road projects on a 78-19 vote.

The Kentucky Republican, who is retiring at the end of this term, had argued that he didn't oppose extending the programs; he just didn't want to add to the deficit.

Gloria Borger, CNN senior political analyst, who spoke with a Republican in the Senate on Tuesday, said members of the GOP felt Bunning had "the right idea" in questioning how the extension would be paid for but think "it is the wrong fight to wage right now."

Bunning's views, Maine GOP Sen. Susan Collins said before the impasse was broken, did not represent the majority of the Republican caucus.

The tensions had seemingly taken a toll on Bunning, who is the first member of the Baseball Hall of Fame to serve in Congress.

He recently lashed out at members of the media, including CNN's Dana Bash, and he used not-so-friendly words on the Senate floor regarding the measure, according to two Democratic sources who were there.

Bunning, observers have noted, has a history of being abrasive.

A newspaper in his home state published a scathing editorial Tuesday calling Bunning's block a "callous contempt for the more than one in 10 working Kentuckians whose jobs disappeared in the economic meltdown."

In 2006, Time magazine called him one of the nation's five worst senators, noting that "Bunning shows little interest in policy unless it involves baseball."

Baseball has been a big part of his life -- and has shaped, some have said, his personality.

Bunning pitched in both the American and National leagues from 1955 to 1971 and was elected to the Hall of Fame in 1996.

Bunning pitched no-hitters in both leagues, including a perfect game in 1964.

In a 1965 Sports Illustrated article, writer William Leggett called Bunning a "grim competitor," who "had been accused by his opponents of sharpening his belt buckle so that he could scuff up the ball and thus get a better grip on it."

Leggett added that Bunning was "one of the few men ever to get Mickey Mantle mad enough to charge from the batters' box."

There are members of Congress, some in his own party, who have in recent years shared Mantle's sentiment.

Bunning openly butted heads with GOP leadership after announcing last year that he would not seek a third Senate term. He blamed party leaders for his campaign's financing struggle.

"To win a general election, a candidate has to be able to raise millions of dollars to get the message out to voters," Bunning said then. "Over the past year, some of the leaders of the Republican Party in the Senate have done everything in their power to dry up my fundraising."

Senate Minority Leader Mitch McConnell, also from Kentucky, and the National Republican Senatorial Committee were somewhat wary of a re-election bid for Bunning, who was likely to face a competitive 2010 race.

Last year, Bunning called McConnell a "control freak" and pledged to sue the senatorial group if it supported another Republican candidate.

Bunning's political career spans decades. After his baseball career ended, he was a stock broker and served two years on the Fort Thomas, Kentucky, city council, four years in the state senate, 12 years in the House and three terms in the Senate.

In 1995, Bunning became the chairman of the powerful House Ways and Means Committee Subcommittee on Social Security, where he favored legislation to raise the outside earnings limit for recipients. The measure later died in the Senate.

In 1998, he narrowly won the Senate race -- 50 percent to 49 percent -- against his Democratic challenger, Scott Baesler.

In the 2004 general election, Bunning edged out Democrat Daniel Mongiardo, 51 percent to 49 percent, to win re-election.

"During the campaign the famously irascible Hall of Fame pitcher had endured repeated questions about his age and even his mental stability, and had stood by while supporters called his opponent limp-wristed," Time Magazine's Michael Lindenberg wrote in a 2009 article. "Always prone to outlandish statements, Bunning himself made news when he said his opponent Daniel Mongiardo, then a state senator and now a lieutenant governor expected to run for the seat in 2010, looked like 'one of Saddam Hussein's sons.' "

Throughout his career, Bunning has earned a reputation as a reliable, aggressive supporter for his state's key industries: tobacco and horse racing.

One of his more memorable accomplishments came when he played a large role in enacting legislation partially lifting baseball's antitrust exemption.

Bunning, who graduated from Xavier University in 1953, is married and has nine children.