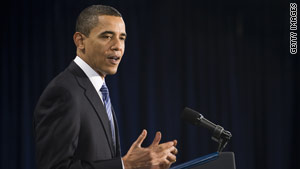 Gibbs said the president will talk about "the way forward" to pass a bill. Among other things, Obama is expected to advocate for an "up or down vote" in Congress if necessary, Gibbs said.

Multiple Democratic sources told CNN that the emerging consensus plan is for the House of Representatives to pass the Senate bill and send it to Obama. A package of changes that mirror the president's plan would then be passed through both chambers under reconciliation rules, which require only 51 votes in the Senate.

Observers note, however, that it remains unclear exactly which health care provisions can be approved under reconciliation, which is reserved for legislation pertaining to the budget. Republicans have angrily criticized the Democrats' potential use of reconciliation, arguing the maneuver was never intended to be used for major policy overhauls along the lines of the health care bill.

Obama's midweek remarks will also deal with the "substance" of health care reform, Gibbs said. White House aides say the president's speech will largely mirror the nearly $1 trillion compromise package Obama laid out one week ago. It may, however, be scaled back in some aspects, they said.