Senators' friendship strong on and off Capitol Hill 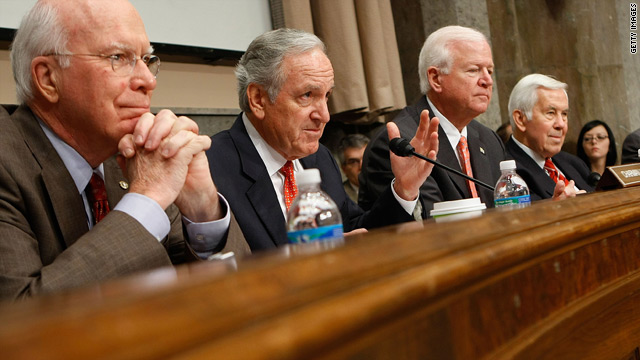 Washington (CNN) -- While many in Washington believe that bipartisanship is long gone, two seasoned senators say it's not -- at least not yet.

The relationship between Sen. Richard Lugar, a conservative Republican from Indiana, and Sen. Patrick Leahy, a liberal Democrat from Vermont, was born in obscurity -- two very junior senators at the far reaches of a committee room table.

Leahy recalled a story from a time when their voices were virtually muted in a committee meeting.

"Neither one of us could hear what they [committee leaders] were muttering. And I said, 'Well, wait a minute, could I ask what was in that amendment?' You could see the two look down like 'Who the heck are these two guys at the end?' [He] takes his gavel and said, 'We're adjourned.' "

After more than 35 years, Leahy and Lugar are senior senators. A lot has changed -- except for the friendship, which has proven stronger than their political differences.

When asked if he would have voted for Lugar, who ran for the Republican nomination in the 1996 presidential race, Leahy said he found it "very difficult not to vote for him."

Their relationship also extends further: They know each other's families and have visited each other's states.

"Poor guy had to take back so much of the Leahys' Vermont maple syrup," Leahy said.

Lugar said Leahy made a point in introducing him to the political leaders in Vermont.

"Really to this date, why he was so interested in dairy, for example, why certain things were occurring vis-a-vis the other New England states. ... It's tremendous," he said.

And that's the thing: This is not just about close friends who accept their different views; this is about getting stuff done.

The pair revamped the Agriculture Department and pushed out two major agriculture bills in the 1990s.

This year, the two are working together on retooling the school lunch program and on two refugee immigration bills -- one labeled as written by Leahy/Lugar, the other by Lugar/Leahy.

The Vermont Democrat admitted that while there are other bipartisan friendships on Capitol Hill, it "does not happen as much as it should."

Lugar said while there are disagreements, there is a sense of "compassion and respect for each other as human beings."

"There will be things which are not going to be on the same page, but we will not really literally commit political suicide to stop each other," he added.

These days, fundraising and trips back to their home states take up enormous amounts of time. In fact, many lawmakers don't even move their families to Washington.

"Dick's son and daughter-in-law and our daughter and son-in-law live about 100 yards from each other, and there's a little playground right nearby and you see the kids playing there all the time," Leahy said. "They're trading toys. We call it the bipartisan playground."

Lugar said he cherishes those moments with the two families.