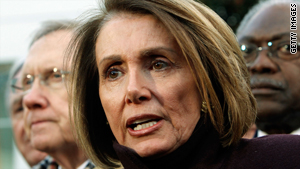 House Speaker Nancy Pelosi laid out tentative plans Friday for the next steps on health care.

Washington (CNN) -- President Obama will make an announcement on "the way forward" on the health care bill next week, his spokesman said Friday.

"My sense is probably closer to Wednesday. Don't hold me to it; it could be earlier or later than that," White House spokesman Robert Gibbs said.

Earlier Friday, House Speaker Nancy Pelosi went further than any top Democrat has before in confirming an open secret in Washington: Democrats are making tentative plans to use a controversial parliamentary shortcut to send the president a health care bill, with or without GOP votes.

The House speaker called the legislative tool known as reconciliation "a simple majority" and said, "that's what we're asking the Senate to act upon."

Asked whether the president would support reconciliation, Gibbs said, "Well, I think that those questions are better left for when we have an announcement from the president on the way forward."

Democratic sources have said that the general plan is for the House to pass the Senate bill and send it to the president, and for a package of changes that mirror the president's plan to be passed through both chambers under reconciliation rules, which would need only 51 votes in the Senate.

Pelosi publicly laid out those tentative plans for the first time and said the first step is figuring out exactly what that package of changes will be. She held out the possibility of incorporating some ideas Republicans put forward in Thursday's all day health care summit.

"Maybe we can find some positive suggestions from what they were talking about there," Pelosi said.

Video: The summit in two minutes

But Republicans repeatedly made clear that they do not support one large health care bill, so they are unlikely to be swayed by Democrats' including any GOP ideas in their legislation.

To work around that Republican opposition by using the reconciliation process, Democrats are exploring two issues: the ins and outs of how complicated process could work, and whether the votes are there in the Senate and House to execute this strategy.

On the process, Democratic aides say they are consulting with the parliamentarians in both the House and the Senate on what is possible.

One example of an open question for the parliamentarians is whether it is possible to pass the changes before the House votes on the Senate bill.

Many House Democrats say that's the only way they would agree to the complicated scenario because they don't like the Senate bill and do not trust the Senate to follow through with a promise to pass the compromise package.

One senior House Democratic leadership aide said that is the biggest obstacle right now in this process.

House Democrats would probably require an ironclad commitment from Senate Democrats and the president before agreeing to pass the changes first.

Another question Democrats have for the parliamentarians is more fundamental: What can they actually pass through the reconciliation process? It is supposed to be used only for legislation that affects taxes and the deficit.

Then there is the challenge of whether Democrats even have enough votes to pull off the complicated game plan. Democratic sources say they still aren't completely sure there would be a 51-vote simple majority in the Senate to finalize health care with the parliamentary shortcut.

Although Democratic leaders are reminding the public that Republicans used reconciliation many times for their legislation, some Democrats may be concerned about a public backlash in the face of GOP accusations that they short-circuited the process.

The House may be even tougher. Democrats passed their version of health care with a slim majority and will be missing several votes because of vacancies.

The one Republican who voted for the House bill, Rep. Joseph Cao of Louisiana, says he'll be a "no" next time.

There may also be some vulnerable Democrats facing tough races this year who decide to change their yes votes to no.

Another major obstacle in passing the Senate's health bill in the House and getting it to the president's desk is abortion. By some estimates, close to a dozen anti-abortion Democrats may vote against the bill because they say it's not strict enough in making sure taxpayer dollars are not spent on the procedure.