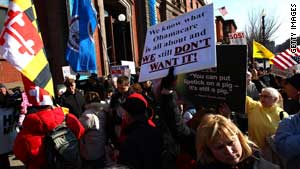 Washington (CNN) -- A majority of Americans think the federal government poses a threat to the rights of Americans, according to a new national poll.

Fifty-six percent of people questioned in a CNN/Opinion Research Corporation survey released Friday say they think the federal government has become so large and powerful that it poses an immediate threat to the rights and freedoms of ordinary citizens. Forty-four percent of those polled disagree.

The survey indicates a partisan divide on the question: Only 37 percent of Democrats, 63 percent of independents and nearly seven in 10 Republicans say the federal government poses a threat to the rights of Americans.

According to CNN poll numbers released Sunday, Americans overwhelmingly think that the U.S. government is broken, though the public overwhelmingly holds out hope that what's broken can be fixed.