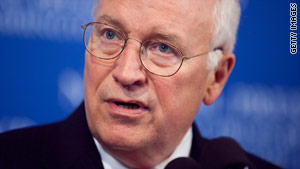 Former Vice President Dick Cheney worked on a chapter of a book he is writing while hospitalized, sources said.
STORY HIGHLIGHTS

"Former Vice President Cheney is feeling good this morning and was discharged" from George Washington University Hospital, spokesman Peter Long said in a statement. "He will resume his normal schedule shortly."

Cheney's office said Tuesday that the 69-year-old had suffered a mild heart attack after complaining of chest pains and being hospitalized Monday.

During the catheterization, doctors examined blood flow to the heart and tested how well the heart was pumping.

Two sources said Tuesday that Cheney had lunch with family members in his hospital room. He also worked with them to edit a chapter of a book he is writing.

Monday's heart attack was Cheney's fifth. The first occurred in 1978, when he was 37. He suffered his second in 1984 and a third in 1988 before undergoing quadruple bypass surgery to unblock his arteries. His fourth heart attack occurred in November 2000. At that time, doctors inserted a stent to open an artery.

The following year, doctors implanted a device to track and control his heart rhythm. In 2008, he underwent a procedure to restore his heart to a normal rhythm after doctors found that he was experiencing a recurrence of atrial fibrillation, an abnormal heart rhythm that affects the heart's two upper chambers.

Since leaving office in January 2009, Cheney has been a critic of the Obama administration, accusing it of failing to treat the fight against terrorists as a war. He has cited the decisions to try accused September 11 mastermind Khalid Sheikh Mohammed in a civilian court, to bring the failed Christmas Day airline bomber into the U.S. criminal justice system and to shut the U.S. military prison at Guantanamo Bay, Cuba.