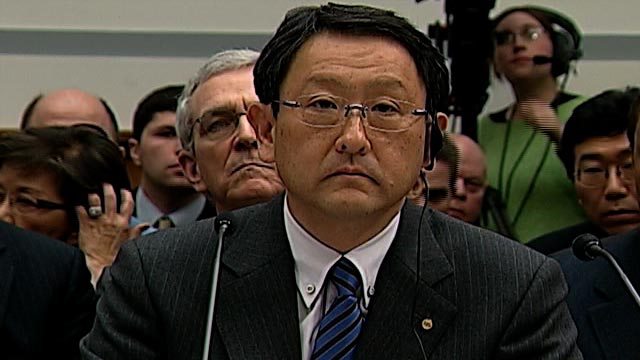 Akio Toyoda, the president of Toyota, is the grandson of the company's founder.
STORY HIGHLIGHTS
RELATED TOPICS

Akio Toyoda, the president and CEO of Toyota, and Yoshimi Inaba, president and COO of Toyota Motor North America, answer questions from members of the House Oversight and Government Reform committee on the recall of 8 million vehicles worldwide. All updates are Eastern Standard Time.

(CNN) -- 6:50 p.m. -- Toyoda tears up and pauses for composure as he thanks the audience for their support. He describes the hearing as an opportunity to remind customers of the company's commitment to quality and safety. "We have to rethink everything about our operations to regain customers' confidence," he says, reading from a statement in English. "We have to reassert the values that have been our hallmark."

6:45 p.m. -- A plant worker from Kentucky and a dealer from Texas join Inaba and Toyoda onstage at the National Press Club, where the two men receive a standing ovation.

5:50 p.m. -- Toyoda makes a brief statement after the hearing thanking Congress and again pledging to change how Toyota handles complaints. He then makes his way through a dense crowd to a Toyota Highlander waiting for him outside. He is due to speak to an audience of Toyota dealers at the National Press Club in Washington later in the evening.

5:37 p.m. -- Chairman Edolphus Towns thanks the men for coming in voluntarily and says he considers their appearance a sign of their commitment to addressing problems. The panel is adjourned.

5:34 p.m. -- Rep. Driehaus reads a letter from a driver who experienced sudden acceleration in his 2005 Toyota Tacoma. The driver said he had no mats and used to race cars. Toyoda says tests conducted so far have not demonstrated the same phenomenon and believes the system is safe, but pledges to continue testing.

5:29 p.m. -- Rep. Steve Driehaus expresses concern over supposed efforts between Toyota and National Highway Traffic Safety Administration to limit the scope of investigations over electronic throttle control systems. He asks if the investigation had not been limited, would the issue have been addressed before today. Inaba says he does not have enough information to comment.

5:20 p.m. -- Responding to Rep. Kaptur's scathing critique, Toyoda extends condolences from "the bottom of my heart" and vows to reflect on what she said.

5:16 p.m. -- Rep. Marcy Kaptur says she is "disappointed" with Toyoda's testimony and does not feel he has shown sufficient remorse or taken enough note of the amount of complaints over the last decade.

5:07 p.m. -- Rep. John Duncan recommends that Toyota appoint "some Americans" to its leadership in Japan.

5:06 p.m. -- In response to a question about why the company's response has been so late in coming, Toyoda reiterates his plans to set up a global commission to address complains more quickly.

4:46 p.m. -- Regarding the dissemination of information across regions, Inaba says, "We did not hide it but it was not properly shared... whatever's happening in Europe should be known in the United States."

4:43 p.m. -- Toyoda says he does not know exactly when the first reports came in, but that the company is working to put in place a structure to address future concerns quicker.

4:30 p.m. -- By the middle of 2011, Toyota will make the readers that retrieve information from a black box commercially available in the U.S. market.

4:21 p.m. -- Toyoda and Inaba deny that they were instructed by corporate lawyers to not discuss problems with electronic throttle control. "We are as eager as anyone else to know if there is any problem," Inaba says.

4:17 p.m. -- Rep. Dennis Kucinich says "the problem is not that you were moving too fast" but that the company was "too slow to recognize material defects that put peoples' lives at risk."

4:15 p.m. -- In response to a question about whether American unions have too much influence over the safety review process, Toyoda says he does not have the context to answer.

4:05 p.m. -- Rep. Eleanor Holmes Norton urges the Toyota officials to make public information from "black boxes." Inaba responds that the company is working on developing black box "readers" that can be made commercially available. He adds that, as of now, the information is not available without the consent of the vehicle's owner.

3:57 p.m. -- Inaba says Camry Hybrids are not on the recall list, adding that the car is produced and supplied in the United States; Toyoda says "right now, it is completely safe."

3:55 p.m. -- Inaba says Toyota will work closely with the National Highway Traffic Safety Administration to make sure that not a single customer complaint is overlooked.

3:47 p.m. -- From this experience, Toyoda says he has learned to place greater emphasis on customers' viewpoints and perspectives and to get information from various regions in a more timely manner.

3:41 p.m. -- Inaba says question of whether Toyota will cover hospital and funeral costs of the family that died in a car accident will be resolved by the company's legal team.

3:39 p.m. -- Rep. Geoff Davis recognizes Toyota's role as one of state's strongest job creators. The company has also donated more than $37 million to charity groups. He asks that the committee focus on the facts and not engage in political theater.

3:34 p.m. -- Toyoda says is aware that representatives from the National Highway Traffic Safety Administration visited regional officials in Tokyo but he did not know about the specific timing or content of the meeting.

3:29 p.m. -- Toyoda says he first became aware of problems with acceleration sometime toward the end of 2009. He says he is now aware that consumer complaints were coming in long before the end of 2009.

3:23 p.m. -- Waving in hand a 2009 company report once considered confidential, Rep. John Mica expresses embarrassment for Toyoda, the company's namesake, and all U.S. dealerships associated with the company over company's past safety record.

3:19 p.m. -- Toyoda says a series of duplication tests are being conducted to assure that problems do not recur and that the findings will be "made public and disclosed and changes will be made in a very transparent manner."

3:15 p.m. -- Rep. Elijah Cummings asks Toyoda how he plans to regain the trust of customers after "a series of promises that seem to come short."

3:06 p.m. -- Rep. Dan Burton of Indiana thanks the Toyota officials for their attendance, compliments Toyota dealers nationwide on "working day and night to correct those mistakes."

2:57 p.m. -- Toyoda announces special committee on global quality that will meet on March 30.

2:55 p.m. -- Referring to comments from the transportation secretary on the need for full transparency during the safety review, Toyoda says his company will lead in providing full transparency on reviews of security and global quality.

2:50 p.m. -- Responding to a question from Rep. Darrell Issa, Inaba says there is nothing he would like to correct from Transportation Secretary Ray LaHood's testimony earlier Wednesday.

2:41 p.m. -- In response to a question from the committee Chairman Edolphus Towns regarding cooperation with National Highway Traffic Safety Administration, Toyoda says through a translator that his company has always worked with authorities.

2:39 p.m. -- Inaba closes by saying, "We are committed not only to fixing vehicles on the road and ensuring they are safe, but to making our new vehicles better and even more reliable through a redoubled focus on putting our customers first."

2:37 p.m. -- Regarding pedals sticking to the floor mat, Inaba says vehicle can be controlled with firm and steady application to the brakes.

2:34 p.m. -- Inaba says he will be closely involved in the review and in efforts to work more closely with U.S. regulators.

2:33 p.m. -- Yoshimi Inaba, president and COO of Toyota Motor North America and chairman and CEO of Toyota Motor Sales, U.S.A., Inc., says efforts are being made to address recalls as quickly as possible.

2:28 p.m. -- As the grandson of the company's founder, Toyoda says the company bears his name. "When the cars are damaged, it is as though I am as well."

2:27 p.m. -- Toyoda apologizes to drivers and offers condolences to San Diego family that died in accident.

2:26 p.m. -- Toyoda says priorities "became confused" in rush to grow business. "We pursued growth over speed," he says, resulting in the safety recall.

2:23 p.m. -- Toyoda begins his comments; he accepts "full responsibility" and "takes quality and safety" of his vehicles seriously.

2:20 p.m. -- After lengthy testimony from Transportation Secretary Ray LaHood before the House Oversight Committee, Akio Toyoda stands as he is sworn in before the committee, along with Yoshimi Inaba, president and COO of Toyota Motor North America.