Despite backlash, some on right praise Brown's independence 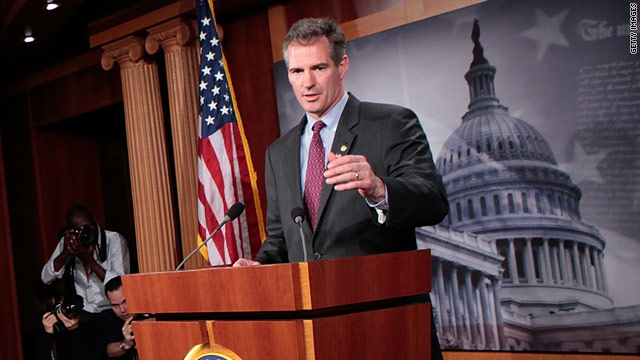 Sen. Scott Brown, R-Massachusetts, speaks to the media after he was sworn in on February 4.
STORY HIGHLIGHTS

Washington (CNN) -- Sen. Scott Brown's vote Wednesday for the Democratic-backed $15 billion jobs bill is a sign that he's showcasing a campaign pledge to bring an independent mind to Washington, a Senate analyst said.

"I think this shows independence," said Brian Darling, director of Senate relations for the conservative think tank Heritage Foundation. "A $15 billion jobs bill is an important vote, but it's not going to be one of the more important votes that they are going to have this year."

Brown, who received widespread support from conservatives and Republicans, was also able to win over independent voters and Democrats in the solidly blue state.

The Senate voted 70-28 to approve the bill, which would give businesses tax breaks for hiring the unemployed and states more money for infrastructure projects, among other things.

Brown joined 12 other Republicans in crossing the aisle to support the bill. One Democrat -- Sen. Ben Nelson of Nebraska -- bucked his party and voted against it.

It now moves to the House, which may take it up as soon as Friday, a House Democratic aide said.

Throughout his campaign to replace the late Sen. Ted Kennedy in the Senate, Brown indicated that he was an independent thinker whose main task was to represent the people of Massachusetts -- and not get involved in congressional politics.

In a statement after Wednesday's vote, Brown said that partisanship needs to be put aside in order to get people working again.

"This jobs bill is far from perfect, and ideally would include deeper and broader tax cuts," he said. "I supported this measure because it does contain some tax relief that will help Massachusetts businesses put people back to work."

Brown warned, however, that if the bill comes back to the Senate "full of pork, waste, fraud and abuse, I reserve the right to vote against it."

Some conservatives questioned the Massachusetts senator's loyalty after he voted Tuesday to allow the jobs bill to go forward to a full Senate vote, but Senate Minority Leader Mitch McConnell said, "The Republican Party represents all parts of the country, different points of view.

"We don't expect our members to be in lockstep on every single issue, and we're happy to have him here. I think it's made a huge, positive difference for us and for the whole legislative agenda."

His vote Wednesday, Darling noted, is not an indication that he has abandoned conservatives -- who greeted him warmly last week when he introduced former Massachusetts Gov. Mitt Romney at the Conservative Political Action Committee.

"This one vote shows his independence, but I don't think it's a definitive sign that he's going to be teaming up with Democrats on significant amount of issues," he said. "I think people are overreacting. Scott Brown ran a very conservative campaign and vowed to be the senator to come to Washington to block President Obama's signature item: Obamacare."

Conservative pundit Michelle Malkin took to her blog, saying it "looks like he hasn't taken up my suggested D.C. itinerary."

"But those of us who knew all along what we were getting -- a game-changer who vowed to torpedo Demcare, but who was not an ideological conservative -- are not surprised."

Rush Limbaugh, the radio talk show host who is perhaps the country's leading conservative voice, said he was not surprised by Brown's actions.

"You will not find me being a giant, big-time, pedal-to-the-metal supporter of Scott Brown. We're talking about a Massachusetts Republican," he said on his radio show. "I must tell you, I'm not surprised by this. It's going to be a waste of energy if you get all bent out of shape and angry about it. Feel free to do it if you want to, but this is not that big a surprise."

Brown's fans on the social networking site Facebook also made their feelings known.

Rafael Diaz-Yoserev wrote: "Get a spine, Scott Brown. We need to stop spending and cutting payroll taxes so that THE PEOPLE, small business owners, begin to be able to create jobs."

Jane Farnsworth Collins called on his page for Brown to resign, saying "Shame on you. Betrayal is a serious sin. Surely this will be your last term as a Republican senator -- you will never get the party endorsement in 2012."

Brown did, however, get support from his online fans.

"Sen. Brown stay the course and continue your independent thinking! Massachusetts is behind you," Marc DeFilippo wrote.

Gerry Hussey Scott wrote, "we trust you did the right thing."