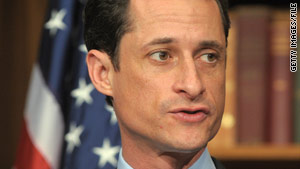 Rep. Anthony Weiner says the Republicans he knows are "a wholly owned subsidiary of the insurance industry."
STORY HIGHLIGHTS

The vote was 406-19 to repeal the exemption, which has been in place since the end of World War II. The 19 who voted against the repeal are Republicans.

Liberal Democrats have said a repeal would help inject competition into the health care industry while reducing consumer costs.

White House Press Secretary Robert Gibbs told reporters Tuesday that President Obama strongly supports the repeal. "At its core, health reform is all about ensuring that American families and businesses have more choices, benefit from more competition and have greater control over their own health care," Gibbs said.

"Repealing this exemption is an important part of that effort.

Gibbs said the president is not seeking repeal of the exemption in lieu of broader changes to the insurance market. "This is a complementary step along the way," he said.

The debate in the House on Wednesday included a colorful moment between Rep. Anthony Weiner, D-New York, and Republicans.

"You guys have chutzpah," Weiner told Republicans during the debate.

"The Republican Party is a wholly owned subsidiary of the insurance industry," he said, drawing the objections of Republicans, who asked that his words be stricken from the record.

Video: Why medical bills are so high

Weiner then asked for unanimous consent to replace his words and said, "Every single Republican I have ever met in my entire life is a wholly owned subsidiary of the insurance industry."

The Republicans objected again, prompting Weiner to rescind his words.

The House version of the health care bill passed last year would have removed the antitrust exemption, while the Senate's version would not.

Advocates of an exemption repeal say the exemption has allowed health insurance companies to essentially divide the country into geographic zones. They argue the companies benefit from what amounts to local monopolies.

Industry defenders, in turn, point out that insurers are still subject to state regulations. They say the impact of an exemption repeal is overblown.

Administration officials and their allies in Congress have taken an increasingly tough stance against the unpopular insurance industry. Among other things, Obama's latest proposal for health care reform would give the federal government new authority to block excessive rate increases by health insurers.

Specifically, Obama's plan calls for the secretary of health and human services to work with a seven-member board made up of doctors, economists and consumer and insurance representatives to review premium increases.

The board, to be known as the Health Insurance Rate Authority, would provide an annual report to recommend to states whether certain rate increases should be approved, although the secretary could overrule state insurance regulators.