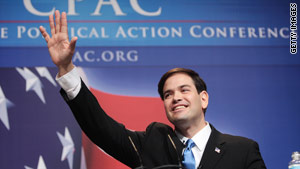 Washington (CNN) -- I am pretty sure I met the next leader of the conservative movement during a three-day confab of activists that wrapped up Saturday here in the nation's capital. I definitely shook hands with a future congressman or maybe even a governor.

When I was 14, I was trying to learn how to hit a fastball. If you follow baseball, you know that spring training has started in Arizona and Florida, and I am writing this column from Washington.

Oh well. I wonder if Krohn can hit a fastball?

Perhaps it was the 18-year-old freshman from Wake Forest University, the 27-year-old senior from Goucher College, or the 24-year-old recent graduate of Bridgewater College who now helps conservative and libertarian students maintain their rights on largely liberal college campuses.

Without a question, it was the youth, the next generation of conservatives, who emerged from the CPAC meeting as the Big Winner. The American Conservative Union, which put on this exhaustive three-day program, estimates that more than 10,000 people attended and 60 to 70 percent were under the age of 30. It was like Spring Break for College Republicans. I even got a bottle opener and a keg cup from the College Republican booth. The slogan on the bottle opener: "The Best Party on Campus."

The future looks bright, or at the very least, there is hope in the future for the conservative movement.

But unlike in my household, it wasn't all about the kids. There were other winners and losers in my mind, so I thought I would share them with you.

Texas Rep. Ron Paul was the overwhelming choice of attendees to be the 2012 Republican presidential nominee in the nonscientific, yet much discussed, CPAC Straw Poll. Paul's supporters were out in force each day of the conference, handing out leaflets and emphasizing the Texas congressman's disdain for the Federal Reserve.

He received huge applause during his late Friday afternoon speech, but when he was announced as the winner of the Straw Poll the audience erupted in boos. Why? Well, let's take a look at a loser.

Admittedly, for political junkies like me, you can be tempted to put too much emphasis on a straw poll. But when there is a chance to survey 10,000 -- that's right, 10,000 -- political activists, it is hard not to get a little excited to see the results. Alas, that is not what happened this weekend. Sure, there were 10,000 attendees, but only 2,395 participated in this unscientific survey.

You do the math. Not quite the snapshot I was looking for. What we learned this past weekend -- OK, we already knew it -- is that Paul has a very loyal following. The Texas congressman has already proven that he can run a national campaign, but can he win the Republican presidential nomination? I'm not sure all of his views resonate with GOP primary voters. But I have to admit, I will be there again next year when the results are announced.

He was the belle of the ball at CPAC. The former Florida House speaker was praised for challenging Gov. Charlie Crist, who is popular with the party establishment, for the Republican Senate nomination and refusing to bow to pressure to abandon his bid.

Rubio kicked off the conference with a speech that hit all of the boilerplate conservative themes, which drew the audience to its feet several times. Rubio's wisest move was placing a form soliciting volunteers and donations on every seat in the ballroom before people took their seats.

A tough decision to tag the former Alaska governor with this brand, but CPAC was her crowd and she wasn't present. Will it hurt her politically? No. But she missed out on an opportunity to appear before a very large and very friendly audience. Instead, she allowed a half dozen or so other potential candidates the opportunity to try to convince attendees they have the best chance of defeating President Obama in 2012, without ever having to explicitly say it.

And there is no doubt in my mind, the adults who forked out $750 for the all-inclusive three-day pass and students who paid $25 for the conference would have bought another copy of Palin's book, even if they already had one on their bedside table.

The former House speaker entered the CPAC conference from a distant door up a staircase, halfway across the cavernous room from the podium. The "Rocky" anthem, "Eye of the Tiger," bellowed from the sound system as Gingrich made his way through the electrified crowd. It was almost one of those "Wow!" moments. Definitely memorable.

The former Pennsylvania senator is being singled out for his decision to shake it up a little bit during his speech. How did he do it? Simply. Santorum delivered an abbreviated speech and then took questions from the audience. He didn't exactly have the best time slot, Saturday at 8:30 a.m. Even I was bleary-eyed.

Yet the former Pennsylvania senator had a pretty good showing and offered up a mea culpa to the attendees for supporting Sen. Arlen Specter's re-election in 2004. Longtime Republican Specter switched to the Democratic Party last year. And Santorum didn't dance around the fact that he is considering a White House bid.

This still influential wing of the conservative movement was well represented at CPAC this year, but the immediacy of some of their top issues -- abortion, same-sex marriage and "Don't Ask, Don't Tell" in the military -- just wasn't a major part of the larger discussion. Instead, these activists were primarily talking about fiscal discipline, lower taxes and limited government. And GOProud, a gay conservative organization, was one of the cosponsors of CPAC.

There has been much speculation that Tea Party activists will actually hurt the Republican Party because this new, decentralized political movement will field candidates to run in the midterm elections. A third-party conservative candidate introduced into a race will actually help the Democrats, because it will split the Republican vote. Remember the New York special congressional election won by a Democrat in 2009, because of a third-party conservative candidate?

While that may happen on a scattered basis in 2010, there was widespread acknowledgment that this is not in the conservative movement's best interests. These activists want to see conservative candidates such as Rubio run in the primaries, but come November, I don't think you are going to see a slew of formidable third-party candidates.

Huh? What? Are you crazy? Well, I am definitely a little crazy, but this was an easy call. Why? Democrats got to see firsthand that conservatives are no longer lying flat on their backs after what was then thought to be a knockout blow that Obama delivered in the 2008 elections.