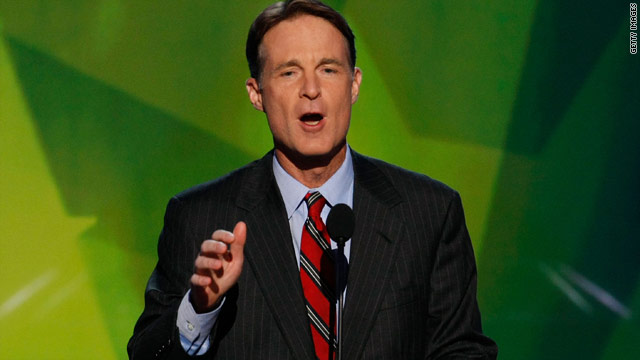 Veteran Democrat Evan Bayh says he will retire from the U.S. Senate at the end of the year.
STORY HIGHLIGHTS

(CNN) -- Why are so many Americans contemptuous of their Congress?

"We've got a lot of good people in Congress, but they're trapped in a dysfunctional system," lawmaker Evan Bayh said this week, as he announced he was going to leave in frustration.

The U.S. Congress has 535 lawmakers, divided between the Senate and the House of Representatives, and derided by a growing number of Americans.

Our latest CNN/Opinion Research poll finds that nearly two-thirds of respondents -- 63 percent -- say most members of Congress don't deserve to be re-elected. That's a record for our poll.

Fully 52 percent said President Barack Obama shouldn't be re-elected either, but that still makes him more popular than his colleagues in Congress.

"This is not a good year to be an incumbent, regardless of which party you belong to," said CNN Polling Director Keating Holland. "Voters seem equally angry at both Republicans and Democrats this year."

The anger isn't hard to explain: the U.S. has two wars, a weak economy and high unemployment. Many Democrats and Republicans also blame an increasingly bitter style of politics in Washington for making problems worse.

Voters will soon have a chance to do something about it. Congressional elections are coming in November.

But in fact, Americans rarely vote out their representatives. Forget the drama of this country's presidential elections; most Congressional races are remarkably predictable. The incumbents tend to win.

In 2008, for example, more than 90 percent of lawmakers who ran for re-election succeeded. Few of the races were even close.

The American political system makes office holders tough to beat. Once elected, lawmakers can usually count on their position to keep them in the public eye and well positioned for the campaign contributions they need for re-election.

Members of the House of Representatives can even profit from electoral districts mapped specifically to include areas where their party can expect support.

So voters have trouble influencing the overall outcome of national legislative elections in the U.S. It takes a remarkable year for enough seats to change hands to topple the majority in power.

With Democrats now in control of both houses of Congress and American voters as angry as we've ever seen them, Republicans are hoping this is one of those years.