Conservatives rally at CPAC ahead of midterms 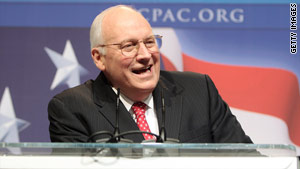 Former Vice President Dick Cheney predicts "a phenomenal year for the conservative cause."

(CNN) -- Political activists from across the country spent the first day of the annual Conservative Political Action Conference discussing policy, blasting the Obama administration and plotting a return to power in November.

The biggest surprise on the opening day of the conference was the appearance of the former vice president, who joined his daughter, Liz, on stage at the close of her speech. He received a thunderous applause as he emerged from behind the curtain and joked he considered for a moment about running for office again.

"A welcome like that's almost enough to make me want to run for office again," he said. "But I'm not going to do it."

Cheney said the developments he has seen in the Republican Party over the past several months are "enormously encouraging."

"I think 2010 is going to be a phenomenal year for the conservative cause, and I think Barack Obama is a one-term president," he said.

The senior Republican in the House, meanwhile, said his party should not try to take over the Tea Party movement.

House Minority Leader John Boehner, R-Ohio, spoke out about the conservative grassroots movement that emerged in the past year out of concerns about certain policy issues and gridlock in Washington.

"The Republican Party should not attempt to co-opt the tea parties," Boehner said. "I think that's the dumbest thing in the world. What we will do, as long as I'm the leader, is respect them, listen to them, and walk amongst them. The other party will never, ever do that."

One of the most anticipated speeches for this gathering of 10,000 conservative activists was Rubio's address, which opened the conference. The former Florida House speaker, who is battling Florida Gov. Charlie Crist for the GOP Senate nomination, received a standing ovation when he took the stage.

"We are witnessing the single greatest political pushback in American history," Rubio said to cheers. He added: "2010 is a referendum on the very identity of our nation."

Rubio said that Americans "are looking for leaders who will offer a clear alternative" to Democrats, and he rattled off a litany of standard conservative proposals that anchor his campaign -- lowering taxes, helping small business create jobs and showing no mercy to terrorists.

Rubio's campaign sought to capitalize on his appearance before the conservative activists by placing a fundraising and volunteer form on every seat in the ballroom.

Unlike Rubio, former Rep. J.D. Hayworth did not get top billing at CPAC -- far from it.

But Hayworth, who is mounting a GOP primary challenge to Sen. John McCain in Arizona, did appear down the hall from the main ballroom on a small panel discussion about free speech -- and spent his allotted five minutes thrashing his opponent.

"You wonder why John McCain is facing this challenge?" Hayworth said to the small audience of conservative activists in the room. "It's because after 28 years in Washington, he may claim conservatism, but sadly those underpinnings have deserted him."

Given the title of the panel -- "They Want Us To Shut Up: Saving Freedom and the First Amendment" -- Hayworth drilled down on McCain's long crusade to reform campaign finance laws, a fight many conservatives believe is an assault on free speech.

But Hayworth said McCain has undergone a "campaign-year conversion to conservatism," because he remained relatively silent after the Supreme Court overturned decades of campaign finance regulations earlier this year.

Hayworth then likened McCain to the left-leaning media watchdog Media Matters and liberal billionaire George Soros before taking his seat on the panel dais.

Throughout the day, the unifying political call to arms from the speakers was the same: Do not abandon your conservative principles.

In addition to serious talks about the conservative platform, the speakers didn't miss an opportunity to jab Obama.

"You probably didn't hear the news this morning, late breaking, that the gold medal that was won last night by American Lindsey Vonn has been stripped," Romney said shortly after taking the stage

"It was determined that President Obama has been going downhill faster than she has," he joked.

In addition to the estimated 10,000 people who will attend the annual event, about 500 reporters from as far away as England and Japan were credentialed to cover it. At least 60 percent, and maybe as high as 80 percent of the attendees are expected to be under the age of 30, a conference spokesman told CNN.

The CPAC conference follows another conservative meeting of Tea Party activists that took place earlier this month in Nashville, Tennessee. Followers of the Tea Party movement express independence from the national Republican Party, but a new CNN/Opinion Research Corporation poll shows that these activists would vote overwhelmingly Republican in a two-party race for Congress.

Walking the halls of the Washington, D.C., hotel where the conference was being held Monday was a gentleman dressed up as an American Revolutionary war figure. And many of the speakers frequently referenced the Tea Party -- tangible signs of how closely aligned the movement is with conservative ideology.

Conservatives were in a different mindset one year ago. At the 2009 CPAC conference, the Republican Party was still reeling from President Barack Obama's victory over McCain as well as the additional gains Democrats made in Congress in 2008.

In the closing speech last year, conservative talk radio show host Rush Limbaugh invigorated the audience, bringing them to their feet with a speech focused on conservative ideals. Another conservative radio and TV host, Glenn Beck, will close out this year's conference on Saturday.

Over the past 12 months, Republicans have seen the political tide turn: Obama's approval rating has dropped below 50 percent, several veteran congressional Democrats have announced they will retire at the end of the year and Brown took the seat occupied by the liberal lion of Massachusetts for more than four decades.

Now, the Republican Party is hoping to capitalize on voter frustration with an unemployment rate slightly under 10 percent, the housing crisis and the debate over health care reform in Congress. Conservatives point to the recent Republican wins in Massachusetts, Virginia and New Jersey as evidence that momentum is on their side.

As conservatives try to coalesce around a message, a group rallying around the cause of "Constitutional Conservatism" unveiled a political manifesto on Wednesday to advocate for limited government and free enterprise.

The "Mount Vernon Statement," modeled on a conservative call to arms issued in 1960, was launched by 18 establishment conservatives such as former Attorney General Ed Meese, movement elder Richard Viguerie and anti-tax advocate Grover Norquist. The group also includes leaders of the Heritage Foundation, Family Research Council and American Conservative Union, among others.

In addition to the potential 2012 White House candidates, attendees will also hear from Minnesota Rep. Michele Bachmann and former Attorney Gen. John Ashcroft as well as other conservative leaders.

The CPAC conference wraps up Saturday with the much-anticipated straw poll, seen as an indicator of the top GOP contenders for the 2012 presidential election.