The official declined to speak on the record citing privacy concerns, but confirmed to CNN that the review includes an in-depth "quality assurance review of the outcomes" of the care Murtha received.

The Navy is keeping the Murtha family apprised of its findings.

Murtha had his gallbladder removed by laparoscopic surgery January 28 at the National Naval Medical Center in Bethesda, Maryland. He later became ill and was admitted to Virginia Hospital Center's intensive care unit January 31 in Arlington, Virginia. Murtha died there February 8 at the age of 77.

Military sources say it's believed Murtha's intestine may have been nicked during the initial procedure, leading to massive infection. A source close to the congressman confirmed that theory to CNN's senior medical correspondent Elizabeth Cohen earlier this month.

"He went in for a routine, minimally invasive surgery" but doctors "hit his intestines," the source close to Murtha told Cohen. 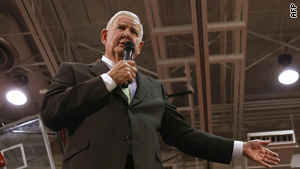 Rep. John Murtha died February 8 at the age of 77.

The review is being conducted to determine if Murtha died due to a preventable surgical error and whether any action against those who performed the surgery is potentially warranted.

The official emphasized the review is being conducted just as it would be in other hospitals that review unexpected deaths. Procedures for such reviews are determined by the independent Joint Commission, a board of 29 people including physicians, nurses, hospital administrators and other health care experts, who spell out standards of care.

The military official said the review of the care Murtha received includes: A "mortality and morbidity conference" meeting by caregivers and other officials to review exactly what happened; a quality assurance investigation by "uninvolved" subject matter experts; a review by a "multidisciplinary patient safety committee;" consultations with Navy and outside medical experts.

As many as 500,000 gallbladder removal operations are done each year in the United States, with relatively few complications.