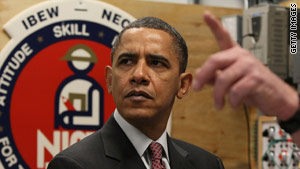 President Obama is facing criticism from both the left and the right when it comes to nuclear energy.
STORY HIGHLIGHTS

Washington (CNN) -- President Obama's announcement Tuesday of loan guarantees for nuclear power plants may encourage new construction, but a problem still remains that has plagued atomic energy for decades: what to do with nuclear waste?

On the left, opponents of nuclear power say the president should not be using taxpayer money to help build more power plants that will produce even more radioactive material, so long as the government has not figured out where to put it all.

"We haven't found a solution for the 100 nuclear power plants operating," said Stephen Smith of the Southern Alliance for Clean Energy. "And waste is building up on-site, with no solution."

On the right, critics fault the president for leaving the country without a plan for disposing of the waste, when he decided to pull the plug on the proposed Yucca Mountain nuclear waste dump in Nevada. The government spent billions of dollars studying the location.

South Carolina Gov. Mark Sanford, a Republican, said the president's decision was "spectacularly misguided, and breaks a promise" made "decades ago" by the federal government to handle the waste.

Sanford accused Obama of making a "Chicago-style" political play to help Sen. Harry Reid, D-Nevada, who faces a tough re-election bid in a state where the Yucca Mountain plan was unpopular. But the White House points out that the president opposed the site since he was campaigning as a candidate, on the grounds of scientific and security questions.

Reid echoed those security concerns, saying any transportation of nuclear materials across the country could open a vulnerability.

"Leave it on-site where it is," he said last year. "You don't have to worry about transporting it. Saves the country billions and billions of dollars."

Currently, 70,000 tons of radioactive waste are stored at more than 100 nuclear sites around the country, and 2,000 tons are added every year.

After uranium has been used in a reactor, the spent fuel remains radioactive for thousands of years. It is taken out and put into a pool of water, or above ground in canisters made of concrete, steel, and lead. The Nuclear Regulatory Commission says the canisters are currently certified for up to 90 years of use, but that term may be extended.

During a visit to the Dresden nuclear plant in Illinois a few years ago, Christopher Crane of Exelon Nuclear stood next to a storage cask and showed CNN how little radiation escapes.

"If you stood here for an hour," he said, "you would pick up the same amount of radiation as you did by flying from Washington to Chicago to visit us today."

But both supporters and opponents of nuclear power largely agree that storing the material in casks at nuclear plants is no long-term solution.

"This generation was responsible for creating the waste," says Jack Edlow, whose Washington-based company transports nuclear material, "and this generation should make the decision to focus on it."