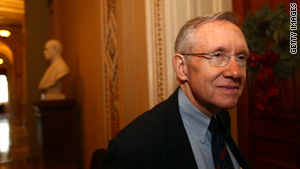 Most observers have considered the public option -- an idea long favored by liberal Democrats -- to be a non-starter since it was dropped from a Senate reform bill passed in December. But Sens. Michael Bennet of Colorado, Kirsten Gillibrand of New York, Jeff Merkley of Oregon, and Sherrod Brown of Ohio signed a letter urging Reid, D-Nevada, to hold a vote on the proposal under a rule known as a reconciliation, which would allow the measure to pass with only 51 votes -- a simple majority.

The letter was co-signed by 119 Democrats in the House of Representatives.

Liberal groups MoveOn.org, the Progressive Change Campaign Committee, Democracy for America, and Credo Action are pushing other Democratic senators to sign the letter as well.

Health care reform has long been considered President Obama's top domestic priority. Democrats, however, have been struggling to reach agreement on how best to pass a bill since Massachusetts GOP Sen. Scott Brown's upset victory last month in the race to fill the seat formerly held by Sen. Ted Kennedy.

"We respectfully ask that you bring for a vote before the full Senate a public health insurance option under budget reconciliation rules," the letter states.

"There are four fundamental reasons why we support this approach -- its potential for billions of dollars in cost savings; the growing need to increase competition and lower costs for the consumer; the history of using reconciliation for significant pieces of health care legislation; and the continued public support for a public option."

Use of reconciliation is limited to legislation affecting the budget and therefore could apply only to certain elements of the health care reform agenda.

Senate Finance Committee Chairman Max Baucus, D-Montana, told CNN in January that he thinks reconciliation will ultimately be necessary to pass a health care bill in the chamber. However, multiple Democratic aides have warned that using the controversial maneuver would take time and evoke criticism of relying on a procedural trick to pass a bill.

Proponents argue there is a precedent for using reconciliation, noting that it was recently used to pass measures such as an expansion of the Children's Health Insurance Program.

A number of conservative Democrats are urging Obama to craft a more narrowly tailored health care bill -- excluding a public option -- that can win at least some bipartisan support. Increasingly frustrated liberals argue it is pointless to pursue negotiations with what they characterize as an ideologically rigid GOP minority determined to block every White House initiative for short-term political gain.

Obama is scheduled to hold a televised health care summit with Republican leaders on February 25. The president has said the talks should involve true give-and-take negotiations as opposed to mere "political theater."

Obama said last week he wants the meeting -- which also will include health care experts -- to "establish some common facts" on the health care issue and reach agreement on the most pressing health care problems facing the country.

To signal his willingness to compromise, Obama said he would consider a Republican push to include limits on medical malpractice lawsuits in a health care bill if the proposal can be shown to truly reduce overall health care costs.

However, Obama said bipartisanship on health care reform cannot mean only that "Democrats give up everything they believe in."

"Bipartisanship depends on a willingness among both Democrats and Republicans to put aside matters of party for the good of the country," he said.

Obama has not yet given any public indication he is prepared to make a renewed push for a public option.

GOP congressional leaders have repeatedly said health care legislation already passed by the Senate and the House of Representatives should be completely scrapped.

"What we need to do is start over, go step-by-step on a truly bipartisan basis to try to reach an agreement," Senate Minority Leader Mitch McConnell, R-Kentucky, recently told reporters.

"My members are open to doing that."