Is it too tough to be a centrist Democrat? 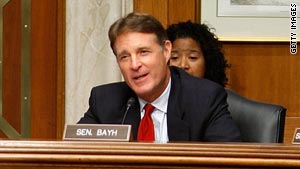 Sen. Evan Bayh, a former two-term governor, was elected to the Senate in 1998.
STORY HIGHLIGHTS

Washington (CNN) -- Facing a backlash from the liberal wing of their party, Sen. Evan Bayh and other centrist Democrats are examining their re-election options and deciding to simply walk away, political analysts note.

"Because Democrats are scared, some people are saying 'it's not worth it ... there's not a place for my voice,' " said political analyst Jennifer Donahue. "It's looking like an exodus -- between him and Sen. Chris Dodd and open seats that look like they could easily be Republican pickups."

But it not's just centrist Democrats feeling the heat from the edges of their party -- former GOP Rep. J.D. Hayworth announced on Monday that he would take on Sen. John McCain, the Republican Party's last presidential candidate, in his home state of Arizona.

Bayh, an Indiana Democrat, announced Monday that he will not seek re-election in November. Bayh is the third Democratic senator to announce he is retiring. Dodd of Connecticut and Sen. Byron Dorgan of North Dakota previously said they would not seek re-election.

"Congress is not operating as it should," Bayh said at a news conference in Indianapolis, Indiana, adding there's too much partisanship and "the people's business is not getting done."

Bayh said he loves public service, but does "not love Congress" and is "not motivated by strident partisanship or ideology."

Donahue said it's simply becoming too difficult to be a centrist Democrat these days.

"You have so much pressure coming at the president from the left flank of the party and so much pressure embedded in Congress on the left," Donahue said. "I think he's frustrated. I think Democrats have to take a good, hard look at what they're doing to the centrists in their party and why. It's not a winning formula to push out the centrists, so why?"

CNN Senior Political Analyst Gloria Borger said Bayh "feels that he doesn't have much of a home in the Democratic party anymore."

CNN Senior Political Analyst David Gergen said McCain isn't necessarily viewed as a centrist by his party, although he has worked across the aisle on issues such as immigration and campaign financing, namely the McCain-Feingold bill.

Hayworth, at a news conference in Phoenix, Arizona, said Monday there are "two John McCains: the one who campaigns like a conservative and the one who legislates like a liberal."

"Incumbents are in trouble," he said. "But when you add to this that you're going to get attacked in your own party from your right or your left, as John McCain is getting attacked, it makes it meaner."

Bayh faced a wave of criticism from liberal bloggers and groups on his positions regarding health care reform and the economy.

The ad, titled "Blueprint," asked viewers to call their members of Congress in "support of the president's transformational blueprint for rebuilding and renewing America," according to the group. One of the states targeted: Bayh's Indiana.

Matt Sledge, a political observer and Indiana native, wrote on the liberal Huffington Post blog on Monday that 2009 was a "terrible" year for Bayh, something that was a factor in his retirement decision.

"Pummeled by both the left and the right, Bayh evidently decided he didn't need to endure any more abuse," Sledge wrote. "That didn't stop him from taking his time -- he waited until just a few days before the filing deadline to let the news slip."

Bayh had spoken in the past about his frustrations with liberals and progressives.

"The only [way] we are able to govern successfully in this country is by liberals and progressives making common cause with independents and moderates," Bayh told ABC News. "Whenever you have just the furthest left elements of the Democratic Party attempting to impose their will on the rest of the country -- that's not going to work too well."

A source told CNN that Bayh was frustrated with the Senate's inability to work in a bipartisan manner. Another source added the tipping point in his decision to retire was the legislative body's inability to approve a bipartisan deficit reduction commission.

The deficit and the overall "health of the country" have been on the forefront of Bayh's agenda. He's taken that concern all the way to President Obama.

"Frankly, I think the public and average citizens have been way ahead of the political class on this. They understand in the long run this is unsustainable, it's bad economics," he told the president in a meeting with Senate Democrats. "They understand that ... it's unfair to our children to ask them to pay these bills."

That frustration with Congress is seen in a recent CNN/Opinion Research Corp. poll.

The margin of error was plus or minus 3 percentage points.

Another poll found that the political climate for incumbents is especially tough.