A year later, 'The Hug' returns to spotlight in Florida Senate battle 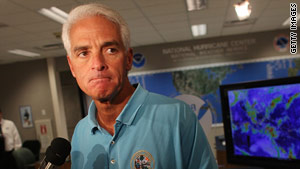 Florida Gov. Charlie Crist is running for the U.S. Senate seat being vacated by Mel Martinez.

(CNN) -- Fort Myers, Florida, is home to nearby beach resorts, exotic birds and the spring training facility for the Boston Red Sox.

One year ago Wednesday, President Obama arrived in Fort Myers to promote his $787 billion stimulus package. It was a piece of legislation, he argued, that would return precious jobs to a state reeling from the implosion of the housing market. Crist, eager to be seen with a president whose approval ratings were soaring at the time, joined Obama for the event.

Appearing on stage at Harborside Event Center during a rally for the Recovery Act, Crist embraced the president before the cameras, a gesture now widely mocked in Florida politics as "The Hug."

A year later, Rubio is holding a rally of his own on the very same spot to remind Republicans that his primary opponent actively campaigned for a bill now seen by many conservatives as the original sin of the Obama administration's financially reckless agenda.

"Marco will seize on this anniversary to remind folks what happened a year ago, and how that event ultimately ushered the way to passage of the stimulus bill and a level of spending that has been unprecedented, and frankly dangerous, to the economy," said Rubio spokesman Alex Burgos.

Crist has carefully tacked to the right over the last year with Rubio climbing in the polls, but he has defended his support for the stimulus, citing the duty of a governor to focus on job creation and budgets rather than ideology.

"Apparently Speaker Rubio doesn't care much for the nearly 87,000 Floridians who have a job today, including 20,000 teachers whose jobs were saved from Florida getting its fair share," Crist spokeswoman Andrea Saul said of the antistimulus rally. "It's unfortunate Speaker Rubio continues to put politics first and people last."

Adding to the drama: The Florida Senate primary is seen nationally as a battle over the direction of the Republican Party.

Rubio is an outspoken fiscal conservative who has been embraced by national conservative leaders such as former Arkansas Gov. Mike Huckabee and U.S. Sen. Jim DeMint, R-South Carolina. He has been showcased on the cover of National Review and throughout the right-leaning blogosphere as a savior of the conservative movement. The influential Club for Growth is also backing Rubio.

Crist, christened a rising GOP star when he was elected to the governor's mansion in 2006, earned a pragmatic reputation in Tallahassee by working across party lines and won the early backing of national Republicans when he announced last year that he would seek the Senate seat being vacated by Republican Mel Martinez.

That endorsement angered grassroots activists who thought Washington officials were putting the Republican stamp of approval on a candidate they deemed too moderate to carry the party mantle. Tea Party activists have also rallied to Rubio's side as he has criss-crossed the state preaching the bible of fiscal conservatism.

The conservative backlash helped push Rubio ahead of Crist in the polls and has many Republicans whispering privately that Crist has no chance to win the primary, which is limited to registered Republicans.

Jason Steele, the chairman of the Brevard County Republican party, said "the wheels have come off" Crist's campaign. The Brevard County GOP conducted a Senate straw poll of the activists who attended their annual Lincoln Day Dinner last Friday. Rubio crushed Crist by a 321-45 tally.

"Gov. Crist is going to have to resurrect his campaign and redefine himself and take a different approach, and if he doesn't, then he has a real problem getting elected," Steele told CNN.

Steele also disputed the suggestion that the Rubio surge is being driven by the Tea Party movement.

Friday's straw poll victory marked the beginning of a spate of good news for Rubio. On Monday, Indiana Rep. Mike Pence, a standard-bearer for opponents of big government, threw his support behind Rubio. And on Tuesday, Grover Norquist, president of Americans for Tax Reform, lined up behind the former House speaker.

National endorsements often matter little in local races, but they appear to have made an impact in the Florida fight -- to Rubio's benefit.

"Primary voters tend to be a little more informed, they pay attention," said John Dowless, an Orlando-based Republican strategist. "In a primary these endorsements do make a difference, and in this environment it plays even bigger. Whether it's Grover Norquist, the National Review, or the Club for Growth, those things matter."

Though Rubio is riding high at the moment, the primary is not until August 24. Crist also has a serious trump card: money. A prolific fundraiser, the governor entered 2010 with more than $7.5 million in his campaign war chest. Rubio has roughly $2 million on hand.

Buzz Jacobs, a Tallahassee-based consultant with Sunshine State, a GOP media firm, said that Rubio "has locked up a portion of the electorate, but he hasn't locked up the entire electorate."

"The Crist campaign has a lot of research and when they go up on TV, I'm sure the ads are going to be good and they are going be hard-hitting." Jacobs told CNN. "It's going to be enough to make people think, 'Is Marco Rubio the conservative that he's been made out to be?' That said, people are going to have even bigger doubts about whether Gov. Crist is a conservative because of the some of the choices he has made."

Also bothersome for Rubio as he rallies against the Recovery Act is that he told The St. Petersburg Times in December that he would have accepted stimulus cash.

"I would have accepted those portions of the money that would not have put Florida in a worse position off in the future than it is right now," Rubio said at the time.

Watching all of this unfold with glee is the likely Democratic Senate nominee, Rep. Kendrick Meek. As the national spotlight has focused on the Republican side, Meek has quietly opened numerous campaign offices around the state. He also entered 2010 with $3.4 million in the bank.

"The Republican debate over politics, ideology, whether to hug the president or shake his hand is a politician's debate," said Meek spokesman Adam Sharon. "Kendrick Meek is putting the people of Florida first and the ideology of politics last."