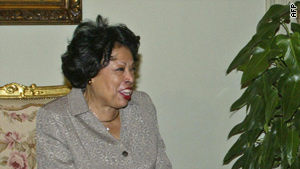 Washington (CNN) -- Democratic Rep. Diane Watson of California will retire at the end of the year rather than run for re-election, three Democratic sources said Wednesday.

The district is considered overwhelmingly Democratic.

Watson's congressional office said she has scheduled a news conference for Thursday but would not confirm the retirement, first reported by CQ-Roll Call.

But Democratic sources confirmed Watson's retirement hours after Republican Rep. Vern Ehlers of Michigan announced that he would not run for re-election in November.

Watson will become the seventh House Democrat to retire at the end of the year rather than run for re-election but the first from a district considered safe for the party.

Separately, Democratic Rep. Robert Wexler of Florida stepped down at the beginning of the year to head up the Center for Middle East Peace.

A special election will be held April 13 for the seat, which is considered safe for Democrats.

Six other House Democrats are running for statewide office rather than re-election in November.

A special election will also be held this year for the seat of Democratic Rep. John Murtha of Pennsylvania, who died Monday.