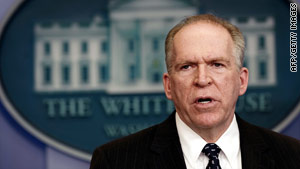 (CNN) -- A leading Republican senator is calling for the ouster of President Obama's chief counterterrorism adviser, the latest salvo in a political fight over the handling of the failed Christmas Day bombing suspect.

Brennan contends Republicans are playing politics by criticizing the administration's decision to charge bombing suspect Umar Farouk AbdulMutallab in criminal court instead of turning him over to military interrogators.

In an opinion piece published Tuesday in USA Today, Brennan accused critics of the administration's handling of AbdulMutallab of "politically motivated criticism and unfounded fear mongering." Such behavior "only serves the goals of al Qaeda," Brennan wrote.

"Terrorists are not 100-feet tall," Brennan wrote, adding it was naive to think that putting AbdulMutallab in military custody as opposed to the civilian court system would have made any difference.

"The suspect gets access to a lawyer, and interrogation rules are nearly identical," Brennan's commentary said.

Bond responded that Brennan was no longer credible, calling him a "mouthpiece for the political arm" of the White House. Bond's response was first reported by the National Review Online, and CNN verified the accuracy of Bond's comments with his office.

Asked for comment on Bond's criticism, White House spokesman Nick Shapiro said in an e-mail to CNN: "Through his pathetic attack on a counter-terrorism professional like John Brennan who has spent his lifetime protecting this country under multiple administrations, Sen. Bond sinks to new depths in his efforts to put politics over our national security."

The issue has become a leading attack point for the GOP, with other congressional Republicans also criticizing Brennan on Tuesday.

"This administration has no clear plan to identify, confront and defeat avowed terrorists as terrorists instead of treating them as common criminals," the lawmakers' statement said.

AbdulMutallab allegedly attempted to detonate explosive material sewn into his underwear aboard a Northwest Airlines flight from Amsterdam, Netherlands, to Detroit, Michigan, on Christmas Day.

Republican criticism focuses on what GOP legislators have called a missed opportunity to interrogate AbdulMutallab instead of providing him with U.S. criminal rights. These critics contend that AbdulMutallab should be treated as an enemy combatant.

At recent congressional hearings, Rep. Peter King, R-New York, accused Brennan of failing to keep Congress informed of the investigation into the failed Christmas Day plot. King maintained Brennan "has set up an iron curtain of secrecy in the White House."

Brennan and Attorney General Eric Holder argue that charging terror suspects in the United States in criminal court is policy that dates back several administrations and was reaffirmed in the Bush administration.

In addition, Brennan said he has briefed senior Republican leaders about AbdulMutallab's interrogation and the information the suspect has been providing investigators.

On Sunday, Brennan told NBC's "Meet the Press" that Bond and other top Republicans in Congress were informed AbdulMutallab was in FBI custody hours after his arrest and none asked if he would be transferred to military custody.

"I'm tiring of politicians using national security issues such as terrorism as a political football," Brennan said on the NBC program, adding: "They're unknowing of the facts, and they're making charges and allegations that are not anchored in reality."

The GOP leaders knew that "FBI custody means there's a process that you follow as far as Mirandizing and presenting him in front of a magistrate," Brennan said Sunday. "None of those individuals raised any concerns with me at that point. They didn't say, "Is he going into military custody? Is he going to be Mirandized?' "

Bond later said Brennan never informed him of plans to read AbdulMutallab his Miranda rights, which include the right to remain silent.

"If he had, I would have told him the administration was making a mistake," Bond said Sunday.