Analysis: Where does the Tea Party go from here? 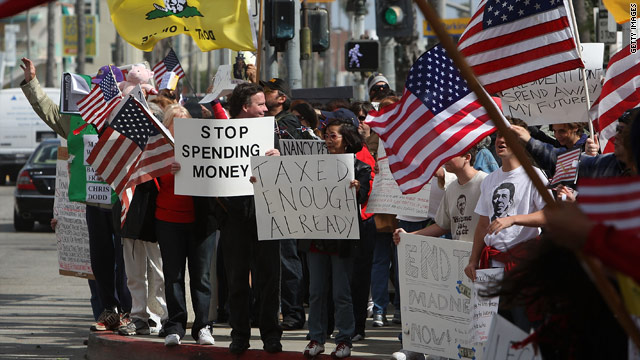 Editor's note: CNN contributor John Avlon attended the Tea Party's first convention Friday and Saturday in Nashville, Tennessee. He is the author of "Wingnuts: How the Lunatic Fringe is Hijacking America."

(CNN) -- As the National Tea Party Convention concluded this weekend, it's clear that the Tea Partiers are propelled by two competing claims -- a principled commitment to fiscal conservatism and a serious case of Obama Derangement Syndrome.

The first group remains true to the roots of the movement as it emerged almost one year ago amid bailout backlash. They feel like modern Paul Reveres, warning their fellow citizens about the unsustainable nature of our government's deficit spending and unprecedented debt.

They still have an important civic role to play in our national debate.

The second group reflects the overheated, hyperpartisanship that emerged over the August town halls and the 9/12 march on Washington.

Oddly enough, this group embraced the tactics of Saul Alinsky's Rules for Radicals and applied them to the conservative cause, with angry confrontation and street theater protests. They ascribe to Obama every sinister characteristic imaginable -- often a secret plot to undermine our constitutional republic and put in a socialist, one-world government in its place.

This is the crowd that carries the signs comparing Obama to Hitler and communists, while proclaiming themselves patriots. Their extremism will ultimately lead the movement to self-destruct unless it is clearly repudiated.

Explainer: What is the Tea Party?

The weekend's controversial and much-covered Tea Party ended up being more of a conference than a convention. It offered speeches and seminars to a relatively small group of attendees. While Tax Day 2009 Tea Parties attracted some 300,000 people nationwide, this convention accommodated just 600 people, who paid nearly $500 each for the privilege of attending the populist conference.

While the crowds at 2009's protests were generally angrier than the speakers who climbed up onto platforms at last weekend's conference, the dynamic was reversed. The crowd was generally more civil than the selected speakers.

Former congressman Tom Tancredo accused the president of being a "committed socialist ideologue" and proposed a civic literacy test for voting.

Alabama gubernatorial candidate and former state Supreme Court chief justice Roy Moore said Obama had "ignored our history and our heritage, arrogantly declaring to the world that we are no longer a Christian nation." He also compared Obama to King George III by quoting the Declaration of Independence: "A Prince, whose character is thus marked by every act which may define a Tyrant, is unfit to be the ruler of a free people."

Sarah Palin was the most cautious by far, saying simply "America is ready for another revolution."

Where will the Tea Party movement go from here?

The for-profit conference organizers declared that "we absolutely do not support a third party" and instead announced the creation of a new corporation and concurrent PAC to support conservative candidates, primarily in the South. This is still very much a leaderless movement with divergent tributaries. There's no shortage of anger at the GOP for starting the path of deficit spending last decade and then backing the first round of Wall Street bailouts under Bush.

There is a rejection of politics as usual, the feeling that both parties are captive of their respective special interests -- big business and big government.

What's your take? Share your thoughts on the Tea Party movement

For the Tea Party momentum to continue in a constructive way, it will need to take at least two further steps: First, repudiate the unhinged Obama-haters and then focus its anger at fiscal irresponsibility into policy proposals instead of bumper-sticker platitudes.

With a growing number of conspiracy entrepreneurs trying to profit off populist anger in a recession, it's also worth keeping the conservative virtue of healthy skepticism in mind.

Remember what the author Eric Hoffer warned in his book "The True Believer:" "Every great cause begins as a movement, becomes a business and eventually degenerates into a racket."