Poll: Tea Party movement fails to make any impression on 4 out of 10 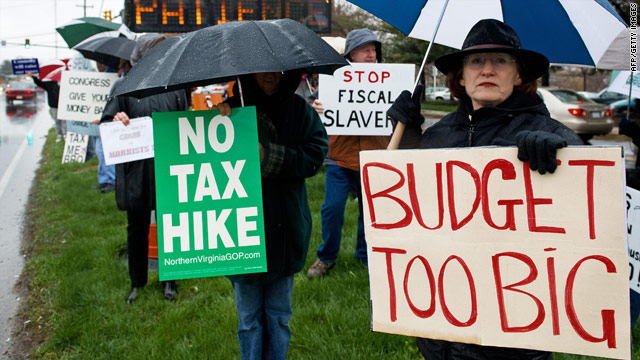 Tea Parties sprang up around the country last year to protest federal spending. This one was April 15 in Merrifield, Virginia.
STORY HIGHLIGHTS

Nashville, Tennessee (CNN) -- One-third of Americans have a favorable view of the Tea Party movement, but a plurality has no opinion at all, according to a new national poll.

A CNN/Opinion Research Corporation survey indicates that 26 percent of the public has an unfavorable view of the Tea Party movement and that 4 in 10 have not heard of the movement or don't know enough to form an opinion. The poll's Friday-morning release comes as what's billed as the first national Tea Party convention begins its first full day of meetings in Nashville.

"The Tea Party movement is a blank slate to many Americans, which is not surprising for a political movement that is only about a year old," said CNN Polling Director Keating Holland. "Not surprisingly, opinion breaks along partisan and ideological lines."

According to the survey, Democrats by a 2-to-1 margin have an unfavorable view of the Tea Party movement; Republicans like it by a 3-to-1 margin. Among independents, 35 percent of independents holding a positive view and 24 percent a negative view.

What's the future of the Tea Party movement?

On Saturday, Sarah Palin will serve as the convention's keynote speaker.

The also poll indicates that Americans are split on the former Alaska governor and 2008 GOP vice presidential nominee, with 43 percent seeing her in a positive light and 46 percent holding an unfavorable view.

Video: Welcome to the Tea Party

"Opinion on Sarah Palin also breaks down along party lines, with seven in 10 Democrats disliking her and seven in 10 Republicans with a positive view. She has a net-negative rating among independents: 42 percent favorable and 47 percent unfavorable," Holland added. "She also continues to rate better among men than women."

The Tea Party movement developed last year in protest to what its supporters saw as overspending in Washington -- by both Republicans and Democrats -- after the stimulus bill, the bank bailouts and President Obama's budget.

The poll was conducted January 22-24, with 1,009 adult Americans questioned by telephone. The survey's overall sampling error is plus or minus 3 percentage points.