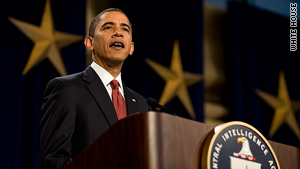 "There are no words that can ease the ache in your hearts," President Obama said Friday.
STORY HIGHLIGHTS
RELATED TOPICS

Washington (CNN) -- President Obama paid tribute Friday to seven CIA officers killed in Afghanistan in December, calling them "American patriots who loved their country and gave their lives to defend it."

Obama delivered the remarks during a memorial service at CIA headquarters in Langley, Virginia. The service was closed to the media to protect the identities of undercover officers in attendance. A transcript of Obama's speech was provided to members of the press.

"There are no words that can ease the ache in your hearts," Obama told families, friends and co-workers of the seven officers. "But to their colleagues and all who served with them -- those here today, those still recovering, those watching around the world, I say: Let their sacrifice be a summons. To carry on their work. To complete this mission. To win this war and to keep our country safe."

A suicide bomber killed the CIA officers and contractors, as well as a Jordanian intelligence official, on December 30 at a U.S. base in Khost, in southeastern Afghanistan.

The bomber was within seconds of being searched by security contractors when he detonated his explosives, a former intelligence official with knowledge of the incident said in January.

Two of those killed were contractors with private security firm Xe, formerly known as Blackwater, a former intelligence official said. The CIA considers contractors to be officers.

Former CIA official Robert Richer called the bombing the greatest loss of life for the agency since the 1983 bombing of the U.S. Embassy in Beirut, Lebanon, which killed eight agents.

"These remarkable men and women are the story of America," CIA Director Leon Panetta said at Friday's service, according to the transcript. "They are the heart and soul of this great country. Their devotion to duty is the foundation of our country."

U.S. and Jordanian officials say the bomber, Humam Khalil Abu-Mulal al-Balawi, had been recruited as a counterterrorism intelligence agent, despite concerns over his extremist views, and was being used in the hunt for a senior al Qaeda figure.

The suicide bombing was "a huge blow, symbolically and tactically," because it eliminated so many CIA officers, who can take years to become ingrained in the region, said Reva Bhalla, director of analysis for Stratfor, an international intelligence company. In addition, she said, the attack showed the ability of the Taliban to penetrate perhaps the most difficult of targets: a CIA base.

But Panetta issued a strong statement at the service Friday, assuring those in attendance that "we will carry this fight to the enemy."

"Our resolve is unbroken, our energy undiminished and our dedication to each other and to our nation unshakable," Panetta said.