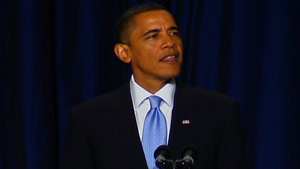 It is "unconscionable to target gays or lesbians for who they are," Obama said during an appearance at the National Prayer Breakfast.

The measure being considered in Uganda is "odious," he added.

The organization which sponsors the breakfast, the Fellowship Foundation, has been associated with efforts to pass the bill, according to the ethics group Citizens for Responsibility and Ethics in Washington.

The measure would punish sexual activity between persons of the same sex with long jail terms or death.

Secretary of State Hillary Clinton also criticized the bill during an appearance at the breakfast.

CREW had protested Obama's appearance at the breakfast, claiming in a statement that the event "designed to appear as if government-sanctioned, actually serves as a meeting and recruiting event for the shadowy Fellowship Foundation," also known as "The Foundation" and "The Family."

A Ugandan legislator who introduced the bill -- which has been roundly condemned by human rights groups -- was scheduled to attend the breakfast before his invitation was revoked, CREW claimed.

The breakfast is held annually on the first Thursday in February. The president, members of Congress and other dignitaries regularly attend.

Members of the Fellowship Foundation could not be reached for comment early Thursday. CREW did not divulge the source of its information.

J. Robert Hunter, a member of The Fellowship who has spoken publicly about the group, told The New York Times in a story published Thursday that it was unfair to blame the group for the Uganda legislation. About 30 family members, all Americans who are active in Africa, conveyed their dismay about the legislation to Ugandan politicians, including the bill's sponsor, Hunter said.

CREW asked Obama and members of Congress on Monday not to attend the breakfast. On Wednesday, it asked television network C-SPAN to refrain from broadcasting the prayer breakfast, or at least to properly identify its sponsor as the Fellowship.

"The Fellowship has been cultivating an unorthodox brand of Christianity amongst the political, military and economic elite of America and other countries for over 50 years, focused on meeting Jesus 'man-to-man,'" CREW said. "The organization operates under an intense veil of secrecy, staying largely out of the public eye and hiding its donors' identities." Its leader, Doug Coe, has led the group since 1969, according to CREW.

The fellowship operates a residence and meeting place on Capitol Hill that has been linked to "ethically troubled" politicians, including Sen. John Ensign and South Carolina Gov. Mark Sanford, the ethics group said.

"The president and members of Congress should not legitimize this cult-like group -- the head of which has praised the organizing abilities of Hitler and bin Laden -- by attending the breakfast," Melanie Sloan, CREW executive director, said in a statement.