Analysts: May be hard for Democrats to keep Obama's former Senate seat 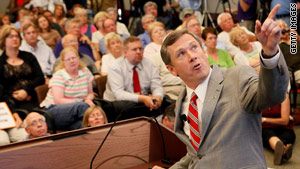 Rep. Mark Kirk is a moderate Republican who has served five terms in the House.

Chicago, Illinois (CNN) -- Political analysts say it might be an uphill climb for the Democrats to hold onto Barack Obama's former Senate seat in Illinois.

Illinois voters are voting today in the first primary in this year's midterm elections.

There are competitive races in both parties in the senatorial, gubernatorial and several congressional contests. There are also contests for attorney general, secretary of state, comptroller and treasurer, but precincts reported light turnout Tuesday morning. The weather wasn't helping -- a couple of inches of snow was falling on the Chicago, Illinois, area Tuesday morning.

The Illinois Board of Elections projected turnout among registered voters be in the mid-20 percent range, spokesman Rupert Borgsmiller said.

The last gubernatorial-senate primary in 2006 had 28 percent turnout, when some parts of the state had six inches of snow, he said.

A lot of attention is also focused on the senatorial election. Incumbent Sen. Roland Burris, who was touched by the Blagojevich scandal, is not running, and the leading Democratic hopeful decided against getting into the race, so Republicans are hopeful moderate five-term Republican Rep. Mark Kirk may be able to capture the seat previously held by Obama.

"Kirk is a moderate. He certainly would appeal to independent and suburban voters," Stewart said. "The people who were energized for Obama, are disillusioned and disgusted right now. The Democrats are disillusioned with the Democratic hierarchy that runs Illinois so a lot of people say, 'I'm going to vote Republican just as a protest as they did for Scott Brown,' " referring to the Republican who was elected last month in heavily Democratic Massachusetts to fill the late Ted Kennedy's Senate seat.

The leading Democratic contenders are state treasurer Alexi Giannoulias and former Chicago inspector general David Hoffman. Giannoulias, the front-runner with more name recognition and considered close to Obama, has been attacked by Hoffman because of controversies relating to the bank owned by Giannoulias' family.

Both candidates are trying to convince voters they would be the strongest candidate to go up against Kirk in the general election, and each is emphasizing his independent credentials.

"A lot of people out there are cynical and disheartened and dispirited with their elected officials," Giannoulias told a campaign rally on Sunday. "I can promise you this ... while it will not be an easy campaign I can unequivocally promise you no one, no one will work harder for every day working class families."

Emphasizing his accomplishments of rooting out corruption in the city, Hoffman told voters Monday, "What we need in Washington are people who are actually separated from the insider political system we have."

For his part, Republican Kirk is highlighting his moderate social record and conservative fiscal credentials as he both tries to appeal to Republican primary voters and the broader electorate for the general election.

"I think people are very worried about out of control spending in Washington. Trillion dollar deficits as far as the eye can see," Kirk told CNN.

Asked about the symbolism of a Republican potentially capturing the seat formerly held by Obama, Kirk said, "I think it would recover our tradition as an independent state. Illinois used to be seen as a swing state, and we used to be very proud of some of the people we elected to office. But right now, especially at the statewide level in Illinois with Roland Burris and Rod Blagojevich, there is a strong wish by independent voters to represent a different choice -- someone who comes from a more suburban tradition than what we have seen."

Kirk so far has not won the support of the more conservative elements of his party, including some Tea Party activists in the state.

Previewing his general election message if he wins the GOP nomination, Kirk says more checks and balances are needed in the state.