Gates seeks to change 'out of date' vision of military challenges 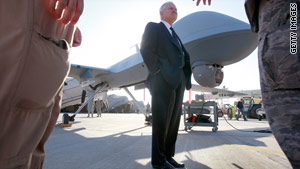 Under Defense Secretary Robert Gates, the Pentagon is building up its fleet of unmanned aerial vehicles.

Washington (CNN) -- Preparing the U.S. military to fight two major conventional wars is "out of date" and does not reflect the numerous challenges U.S. military forces could face in the future, U.S. Defense Secretary Robert Gates said Monday.

Gates made that pronouncement as he revealed the 2010 Quadrennial Defense Review, the military's strategic outlook. He said the military needs to start planning for multiple operations such as major disasters in the United States and various scuffles around the planet.

"We now recognize that America's ability to deal with threats for years to come will depend importantly on our success in the current conflicts," Gates said, pointing out this is the first time the anti-insurgent wars in Iraq and Afghanistan have been included in a Quadrennial Defense Review (QDR) as long-term planning priorities.

He said the previous idea of planning for two conventional wars was "too confining and did not represent the real world that ... our military forces are going to face in the future."

The quadrennial review is a congressionally mandated document in which the Pentagon looks at future threats and the requirements to mitigate them. That the 2010 review was announced the same day as the 2011 Department of Defense budget was not an accident. The review is a major driving force behind how the Pentagon plans its budget.

The 2011 budget request "builds on the reforms begun in last year's budget, changes that were broadened and deepened by the analysis and conclusions contained in the QDR," Gates said.

A common theme between the fiscal year 2011 budget and the 2010 review is reform, something Gates has been pushing since his arrival in late 2006.

He announced the cancellation of a number of projects, saving billions of dollars, as well as the restructuring of the long-delayed next generation F-35 Joint Strike Fighter program.

However, the Defense Department budget is up $44 billion over last year, totaling $708.3 billion, including funding for the wars in Iraq and Afghanistan. Among the additions are an increase in the number of unmanned aerial vehicles -- something also called for in the defense review -- and putting a priority on adding new helicopters to the fleet.

Gates said the review calls for "a 75 percent increase over the next couple of years in the number of combat air patrols by the most advanced UAVs [and] increasing the availability of helicopters by procuring more aircraft."

Both aircraft platforms are key tools in the wars in Iraq and Afghanistan, and Gates said they will total about $9 billion.

While special operations forces continue to be a priority, as they were in the 2006 review, the 2010 outlook places emphasis on adding more troops and improving the support for the elite troops.

That support will include new AC-130 gunship aircraft to protect the troops during combat missions as well as an additional 2,800 combat and support personnel who would improve intelligence and communications for the special operations forces in coming years, according to Gates.

Looking elsewhere in the world, the Pentagon still is keeping close watch on China.

"The lack of transparency and the nature of China's military development and decision-making processes raise legitimate questions about its future conduct and intentions within Asia and beyond," the review says.

The 2006 review was heavily focused on the threat of a large-scale conventional war with China and that country's saber rattling over Taiwan. The 2010 version still stresses such threats from China, but also looks at the need to defend against a growing threat of cyberattacks -- without directly tying China to past cyberattacks, according to Pentagon officials.

In another area, intelligence shows that terrorists have plotted to get their hands on biological, chemical or nuclear material to attempt attacks, and the Pentagon expects weapons of mass destruction to be a continued threat in the future. In response, Gates said, the military "will expand capabilities to counter WMD threats, strengthen interdiction operations, refocus intelligence requirements, enhance and grow international partnerships and thwart proliferation."

The report recommends that the Pentagon develop a joint task force headquarters to oversee these operations.

One of the biggest costs for the Pentagon since 2001 has been in health care as the military handles the thousands of mentally and physically wounded troops each year from the wars in Iraq and Afghanistan, on top of taking care of day-to-day health care needs for troops and their families.

The health care budget rose from $19 billion in 2001 to $50.7 billion in the latest proposal. The Pentagon will spend some $8.8 billion in the coming budget alone for expanding assistance counseling, child care and education to support military families, and another $2 billion for wounded warrior initiatives, with a special focus on the signature ailments of current conflicts, such as post-traumatic stress disorder and traumatic brain injury, Gates said.

Future conflicts can be handled in an environmentally responsible way, it says, by using more solar power and biofuels, and increasing overall energy independence. It also points out that the Department of Defense "provides environmental stewardship" at hundreds of bases around the country.

Bigger challenges for the Pentagon will be environmental catastrophes and future conflicts fought around and over reduced resources, the review says.

It calls climate change an "accelerant of instability" and suggests the military in planning for future operations will have to take into account climate factors such as rising sea levels and reduced ice in the Arctic, in addition to what climate change could bring in terms of the spread of disease, mass migration and a scarcity of resources.