Focus of health care bill may be changing, officials signal 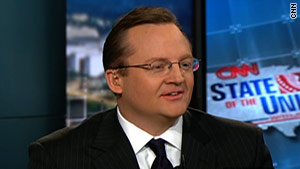 Washington (CNN) -- Democratic efforts to pass a health care bill have stalled a bit, and the immediate focus may be shifting toward health insurance reform instead of quickly trying to pass a comprehensive bill, White House officials signaled Sunday.

Robert Gibbs, the White House press secretary, told CNN's "State of the Union" that passing a health care bill was "still inside the five-yard line." His comment pulled back the assessment several weeks ago by David Axelrod, the senior adviser to President Obama, that the bill was on the one-yard line, which in football would mean it was close to passing.

On the NBC program "Meet the Press" on Sunday, Axelrod referred to the issue as health insurance reform when talking about next steps.

Asked about a comment by Democratic Sen. Mary Landrieu of Louisiana that the health care bill was on life support, Axelrod said, "I hope that's not the case" for tens of millions of Americans who lack health coverage or are otherwise "disadvantaged" in their relationship with insurance companies.

Democratic hopes to get a bill to Obama's desk by now were derailed by the Republicans' upset win in the January 19 special election in Massachusetts to fill the late Ted Kennedy's Senate seat.

Pelosi, D-California, described a two-step process in which the House would likely vote in coming weeks on a series of specific health care provisions that have popular support. At the same time, Pelosi said, work would continue on finding a way to pass a more comprehensive overhaul later.

The idea was to demonstrate continued momentum for some of the most important aspects of health care reform, Pelosi said.

House Democrats believe that moving forward with some health care reforms that the public favors would demonstrate their resolve to work on a top priority issue during a congressional election year.

However, several Democratic aides acknowledged it was unclear if the Senate also would pass the piecemeal health care measures.

On Sunday, Gibbs was noncommittal when asked if Obama was considering breaking the health care bill into smaller measures that might be able to gain bipartisan support.

"I don't think we know yet the answer on the process of this," Gibbs told CNN.

Another strategy has House Democrats negotiating several changes to the Senate's health care bill in order to get enough support to pass it in the House.

The White House has negotiated with labor leaders to modify the tax plan for expensive health care policies by exempting many health plans covering union workers until 2017.

Republicans continued to criticize Democrats for seeking to move forward with a plan they say the American people have rejected in recent elections.

House Minority Leader John Boehner, R-Ohio, said on "Meet the Press" on Sunday that the Democratic bills passed by the House and Senate would give the government too large a role in the health care system.

"The American people are smart enough to do business on their own," said Boehner.

In the Senate, some liberal Democrats have urged Majority Leader Harry Reid, D-Nevada, to use a legislative tool known as reconciliation, which would allow some components of the health care bill to pass with only 51 votes.

Other Democrats in tough re-election fights worry voters would see such a move as legislative gimmickry, reinforcing complaints that Democratic control of Washington has been business as usual.