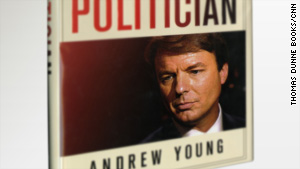 In "The Politician," former John Edwards' aide Andrew Young details his efforts to conceal an affair and the birth of a child.
STORY HIGHLIGHTS
RELATED TOPICS

Washington (CNN) -- A new book about former Sen. John Edwards paints him as a cold, calculating and reckless politician willing to deny fathering a daughter, risking his marriage and putting the Democratic Party in potential political jeopardy -- all in the name of trying to win the presidency.

In "The Politician," former Edwards' aide Andrew Young details his efforts to conceal an ongoing extra-marital affair and the birth of a child out-of-wedlock.

"The Politician" went on sale Saturday.

Young described an elaborate plan that allowed Edwards to maintain a mistress while he sought the Democratic presidential nomination in 2008. The plan was funded by two wealthy benefactors, the late trial lawyer Fred Baron and banking heir widow Bunny Mellon, but Mellon was unaware that her money was being used for the mistress.

A federal grand jury is investigating payments the former senator's campaign and supporters made to Rielle Hunter, who was a videographer as Edwards was preparing a bid for 2008 White House run.

In the book, Young writes that "the prosecutors pressed me for exact information about checks that were written, the way the money was used and the timing of events. They wanted names, dates, and amounts in very specific terms."

Young, who portrays himself as a one-time idealistic loyal aide, said he was the point person in arranging rendezvous for Edwards and Hunter and helped to keep the affair a secret.

And when Edwards impregnated Hunter, Young said he agreed to the senator's request to lie and say he was the father even though Young, himself, was married with three children.

Young said he told his wife about agreeing to Edwards' request as the couple drove through a McDonald's drive through to pick up food for their son.

"After I finally got to holler for Chicken McNuggets with chocolate milk and the right toy, I turned to Cheri and in the time it took us to reach window number one (where you give them the money), I said, 'Edwards wants me to say I'm the father of Rielle's baby, and then Fred's gonna fly us off to someplace where we can all hide,' " Young said.

His wife, Young recounted, was dumbfounded.

"Are you out of your mind? Why would you even tell me about this? Why didn't you just say no?"

Young said Hunter was also initially against the idea but warmed up to it after being told her financial needs would be met. His wife, Cheri, eventually agreed to the plan, setting in motion a chaotic time for the family as they uprooted their lives in North Carolina and criss-crossed the country with Hunter and their children in an effort to evade the media.

Edwards denied that he was the girl's father for more than a year, saying the affair was over before Hunter became pregnant. Last week, he acknowledged paternity.

"I am Quinn's father," Edwards said in a statement. "I have been able to spend time with her during the past year and trust that future efforts to show her the love and affection she deserves can be done privately and in peace."

John Edwards and his wife, Elizabeth, have legally separated.

On Friday, John Edwards' lawyers released a statement saying that early reports about the book indicate there are problems with Young's account.

"While we have not had an opportunity to view the interview or read the book, we urge extreme caution by everyone involved," his attorneys wrote. "From media reports, it is obvious that there are many allegations which are simply false. It appears that Andrew Young is primarily motivated by financial gain and media attention."

Earlier in the week, Elizabeth Edwards also challenged accusations Young made in the book regarding her cancer and the couple's children.

"Elizabeth is moving on with her life and wants to put this difficult chapter behind her," her publisher Random House said in a statement.

"It was an excrutiatingly (sic) painful period for her and she (has) no interest in rehashing the past. Based on the limited portions of the book that have been made available, it is clear it contains many falsehoods and exaggerations.

"She will not engage in a dialogue on each of the false charges, but would like to set the record straight on two key points. First, the allegation that she sought to politicize her cancer is unconscionable, hurtful and patently false.

"Second, she believed Andrew Young to be the father of this child until her husband confessed his paternity (sic) to her this past summer. She will have nothing further to say."

In the book, Young accuses Elizabeth Edwards of engaging in a smear campaign to undermine his credibility.

Young said it wasn't until John Edwards privately expressed indifference about the birth of his daughter, Frances Quinn Hunter, in February 2008, that he realized the former senator cared only about himself.

"After watching and hearing John Edwards practice a thousand little deceptions and tell a thousand different lies, ostensibly in the service of some greater good, I finally recognized that he didn't care about anyone other than himself," Young writes.

"A precious living, breathing human being -- his daughter -- had come into the world, and he wasn't inclined to even call the woman who had given birth to her. Instead, I had to prompt him to do the right thing, to do the most basic, human thing.

"My faith in him died almost instantly, and I felt both ashamed of my naïveté and very afraid for the future of my family."

• He has a sex tape of Edwards in his possession showing the senator with a "naked pregnant woman" that Young says is Hunter. Young said he found the damaged tape in "a box of trash that Rielle had left behind after she stayed with us for a few weeks" in the Raleigh, North Carolina, home his family was renting. Young writes that even though the woman's face is obscured "it was safe to assume it was Rielle."

• Despite Edwards' carefully crafted image as a champion for everyday people, he was "irritated by ordinary events. He especially hated making appearances at state fairs, where 'fat rednecks try to shove food down my face. I know I'm the people's senator, but do I have to hang out with them?'"

• Edwards understood his audience and before appearing at a Service Employees International Union health care event in Las Vegas, Nevada, he instructed Young to take his Italian suit coat to a tailor to remove the label indicating it was Italian-made. In its place, Edwards had the tailor sew in a "Made in the USA" label that had been on Young's jacket.

• When Edwards was not on the Atkins diet, he "loved Cracker Barrel" restaurants as well as ribs.

• Edwards thought that 2004 Democratic presidential nominee John Kerry "just wasn't all that smart." Kerry, a senator from Massachusetts, would later pick Edwards to be his vice presidential running mate.