Obama delivers his first State of the Union address 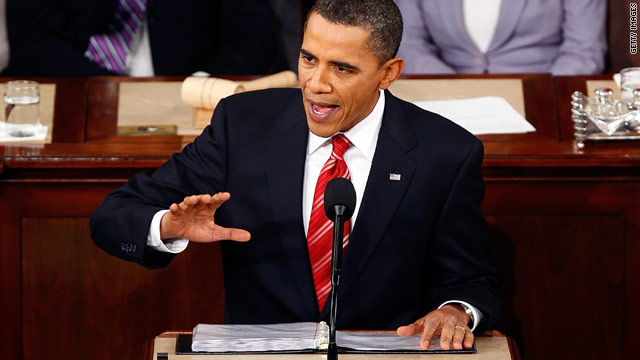 President Obama delivers his first State of the Union address against a backdrop of an American public anxious about the economy and lawmakers on edge about the midterm elections. CNN.com provides live updates of the speech.

(CNN) -- 10:20 Address ends with Obama calling on Americans to "seize this moment -- to start anew, to carry the dream forward and to strengthen our union once more"

10:18 Obama acknowledges that his administration has had political setbacks; says "some of them were deserved." Obama says the "spirit of determination and optimism" is what keeps him fighting

10:17 On discord in politics: "Democracy in a nation of 300 million people can be noisy and messy and complicated. And when you try to do big things and make big changes, it stirs passions and controversy"

10:13 Obama says he will work with Congress and the military to repeal "the law that denies gay Americans the right to serve the country they love because of who they are"

10:08 Obama says the threat of nuclear weapons is "perhaps the greatest danger to the American people"

10:06 Obama details the challenges in Afghanistan: "There will be difficult days ahead. But I am confident we will succeed"

10:02 Obama mentions Massachusetts special election: "After last week, it is clear that campaign fever has come even earlier than usual. But we still need to govern." He calls out Republicans, saying, "just saying no to everything may be good short-term politics, but it's not leadership"

9:59 Obama calls on Congress to publish all earmark requests on a single Web site before there's a vote "so that the American people can see how their money is being spent"

9:57 Obama says Washington is facing a "deficit of trust," and calls for action on "both ends of Pennsylvania Avenue" to restore credibility

9:54 Obama announces he will establish a bipartisan deficit reduction commission by executive order

Video: Healthcare: 'I will not walk away'

Video: We face a 'deficit of trust'
RELATED TOPICS

9:54 "We will not continue tax cuts for oil companies, investment fund managers and those making over $250,000 a year. We just can't afford it"

9:52 Obama proposes steps to "pay for the $1 trillion that it took to rescue the economy last year," including a partial freeze on some government programs. He says he will enforce the freeze by veto if he has to

9:48 On health care, Obama urges Congress not to walk away. "Not now. Not when we are so close. Let us find a way to come together and finish the job for the American people"

9:45 Standing ovation after Obama acknowledges first lady Michelle Obama for her efforts to tackle childhood obesity. With all eyes on the first lady, Obama notes, "She gets embarrassed" as she motions for those in the chambers to sit down

9:44 Obama gets more laughs: "By now it should be fairly obvious that I didn't take on health care because it was good politics"

9:37 Obama announces goal of doubling exports over the next five years, an increase that he says will support 2 million jobs in America. "To help meet this goal, we're launching a National Export Initiative that will help farmers and small businesses increase their exports, and reform export controls consistent with national security"

9:34 On financial reform: "The lobbyists are already trying to kill it. Well, we cannot let them win this fight. And if the bill that ends up on my desk does not meet the test of real reform, I will send it back"

9:29 Obama urges the Senate follow the House's lead and pass a jobs bill, saying, "I want a jobs bill on my desk without delay"

9:28 Obama says workers in Tampa, Florida, will soon break ground on a new high-speed railroad funded by the Recovery Act

9:27 On stimulating the economy: "I'm proposing that we take $30 billion of the money Wall Street banks have repaid and use it to help community banks give small businesses the credit they need to stay afloat. I am also proposing a new small business tax credit -- one that will go to over one million small businesses who hire new workers or raise wages. While we're at it, let's also eliminate all capital gains taxes on small business investment; and provide a tax incentive for all businesses, large and small, to invest in new plants and equipment."

9:23 Obama credits the creation of 2 million jobs with steps his administration has taken toward economic recovery, adding, "We are on track to add another one and a half million jobs to this total by the end of the year"

9:20 CNN's Candy Crowley observes: Always some good theater at these events. Obama talks about the taxes he has cut. No Republican stands to clap, and the president calls them out, "I thought I'd get some applause on that one"

9:18 Obama says the bank bailout "was about as popular as a root canal"

9:16 Obama draws first applause after he says he has "never been more hopeful about America's future" than tonight

9:13 On the economy, Obama says "the worst of the storm has passed"

9:12 Obama says America is being tested, but said "we must answer history's call," conjuring up memories of such times of struggle as the Civil War Battle of Bull Run, the storming of Omaha Beach in World War II and the stock market crash of 1929

9:11 Obama begins his State of the Union address

8:48 p.m. The president's speech is being written right up until the last moments, according to two White House aides, who say they have not seen a new draft since about noon today. An embargoed copy of the full speech was supposed to be released at 8:30 p.m., but there's no sign of it yet because of last-minute changes.

Senior officials said the president's broad goal was to seize back the mantle of change by talking about the need for a "new beginning" between Democrats and Republicans that can restore trust in Washington.

Along these lines, the president was to make what officials described as a passing reference to the special election in Massachusetts but would not have a "chastened" tone like Bill Clinton after the 1994 election. Instead, officials said he would use the election defeat as a way to challenge Republicans to meet him halfway on the major issues facing the nation.

Officials said he would note that with Republicans now having 41 votes in the Senate, they can't just block everything.

The first test will come next week when the Senate is expected to begin debate on a jobs bill. The president was to specifically try to sprinkle the jobs bill with small business and corporate tax cuts to win over some Republican votes and call their bluff if they do not come on board.

While jobs and the economy were to make up the bulk of the speech, officials said health care would also figure prominently. But they noted the president would not get too specific on the path forward because key lawmakers want to take a deep breath on the volatile issue while ramping up much more time on the jobs legislation.

Beyond jobs and health care, officials said the second tier of the agenda would focus on three primary issues:

-- Financial regulatory reform, which would give the president another chance to press Wall Street to change the rules of the road to prevent another crisis.

-- Climate change legislation, where the president would specifically cite the work of lawmakers in both parties trying to broker a compromise.

-- Education reform, where the president would push for an increase of up to $4 billion despite lean times for other key parts of his budget.

Complete coverage on the State of the Union address